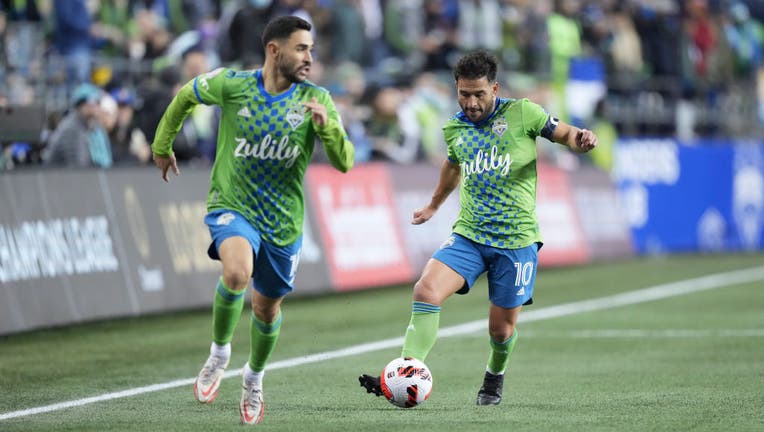 SEATTLE - Thursday night's 5-0 victory over FC Motagua in the preliminary round of the Concacaf Champions League showcased the firepower of the Seattle Sounders as they head into their MLS opener against Nashville SC on Sunday.

Nicolás Lodeiro, Cristian Roldán, Jordan Morris. Kelyn Rowe and Léo Chú all scored as part of a resounding victory to advance to the quarterfinals of the Champions League.

With Lodeiro and Morris back to full strength after missing most of last season due to injuries, the Sounders appear, on paper, to be incredibly dangerous offensively. Add in the free agent signing of Albert Rusnák to add to their midfield effort and the Sounders shouldn't have issues scoring goals this season.

"Jordan Morris is like a new player because he didn't play a lot last year. Nico Lodeiro is like a new player this year. Albert Rusnák is a big player and big signing for the club. Yes, we've improved the roster. One from outside of the club, but two internally from the club," head coach Brian Schmetzer said.

The scoring explosion against Motagua won't do anything to dispel the thought ahead of the MLS opener this weekend.

"It's very nice to see us score five goals in one game and play the way we did, but at the same time we have a tough game in Nashville (ahead) and the MLS is very difficult," said Roldán, who scored the second of the night for the Sounders. "So we have to take it game by game, week by week. Definitely have to manage expectations because we're going to have lows throughout the season."

The Sounders managed a draw on the road against Motagua in the first leg of the match a week ago in Honduras. Lodeiro's goal in the 34th minute broke the deadlock. Roldán's goal in the 47th minute opened the flood gates. Morris (56th), Rowe (61st) and Chú (73rd) piled on to give Seattle the convincing win.

The Sounders needed to win the game outright to advance as road goals serve as a tiebreaker. They didn't leave the result in doubt. They advance to face Club León of Liga MX in the quarterfinals of the Champions League.

León was the Sounders' opponent in the final of Leagues Cup last year. León earned a 3-2 victory over the Sounders to win the trophy. Leagues Cup is an annual tournament between teams from MLS and Liga MX.

"They have very talented players," Schmetzer said of León. "I actually really enjoyed scouting that team. I think their coach is a very good coach. Tonight after the game as were discussing our performance, I actually mentioned that there might be a little bit of revenge. We can use this as hey, last year, we did not complete the objective, which was to win Leagues Cup and beat León.

"And so now can we use a little bit of that as motivation? Maybe? Sometimes that's maybe just coaches talking. I think the group in there really understands the importance of Champions League and they certainly respect and understand León's quality. So we will prepare for them like we always do and our club always, always wants to win every game, every competition that we enter, so obviously it will be a tough challenge."

The first leg against León will be in Seattle on March 8 at 7 p.m. PT. The Sounders will travel to Estadio León in Mexico the following week to face León at 6:15 p.m. on March 15.

One benefit of the blowout result over Motagua was that Schmetzer was able to pull players early to rest them ahead of the opener with Nashville. Lodeiro, Morris, Roldán and Nouhou were all parked early for rest.

Raúl Ruidíaz also came out of the game early, being replaced at halftime. However, Schmetzer said Ruidíaz had a hamstring issue that prompted his substitution.

"We will assess Raul. He had some hamstring tightness and as a precaution we took him out of the game. It was not like the injuries that he suffered last year, but it's early and I don't want to risk losing Raul for an extended period of time. So we made the decision to be very cautious."

Ruidíaz posted a photo to his instagram stories of his right leg with a sleeve on it and the caption "nos vemos" with a peace sign and an angry emoji. "Nos vemos" translates to "see ya" in English."

It seems unlikely Ruidíaz will be available fo the game against Nashville on Sunday given the hamstring injury.

Nashville SC is entering their third season in MLS. They finished third in the Eastern Conference last season and advanced to the conference semifinals before falling to the Philadelphia Union in penalty kicks.