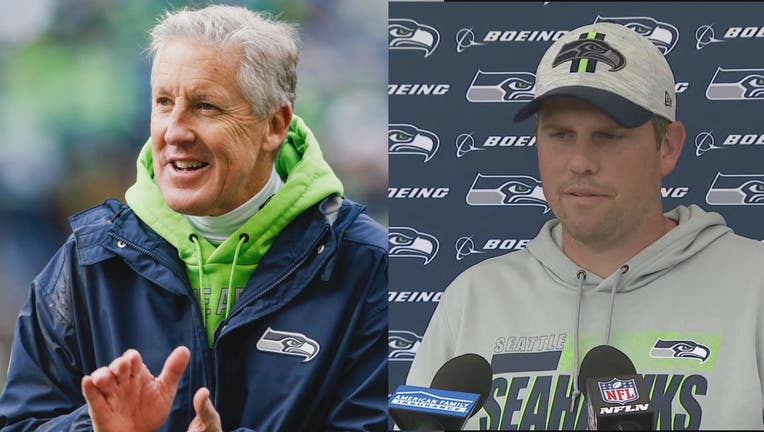 If today showed me anything, it’s that Pete Carroll’s most radical move as head coach – hiring Shane Waldron with a completely new offense - really wasn’t as radical as it seems.

Russell Wilson threw four touchdowns and no interceptions in a 12-point win over the Colts. But if you look at the stat line alone, it reflects exactly what Carroll wants out of an offense and out of his quarterback: Balance and Efficiency.

The Seahawks ran the ball 27 times, four more times than Russell Wilson passed (23). But Wilson still completed more than 78 percent of his passes and didn’t make any mistakes.

If this is reflective of what we’re going to see with Waldron’s offense this season, it makes perfect sense. Because while it might look different, Carroll’s fundamental principles still apply.

It’s one of the reasons Carroll was so quick to pull the plug on the short-lived "Let Russ Cook" era last season. Wilson might’ve come out gangbusters at the start of the year, but little about what we saw in the first nine games conformed to the way Carroll likes to play football. During that time, the Seahawks passed the ball 61 percent of the time with Wilson averaging more than 37 passes per game.

Carroll clearly has a distaste for what "Let Russ Cook" represents. It led to a comical moment today.

"Shane's first time out - he and Russ were just cooking," Carroll said, before realizing the term he'd just used. "Oh I'm sorry I said that. Can you scratch that? Doggone it! Shoot, that's out there. Dang it. I didn't think I said that once all last year when that was happening."

With Shane Waldron, we’re getting entirely different looks, with pre-snap motion, mixing in tempo and misdirection. But what we’re getting is an offense that STILL reflects the main tenets of what Carroll believes in.

The philosophy remains – it’s just the method that changes.

By all accounts, today was just our first real look at this revamped offense, and there’s so much left to be seen. But if today was any indication, this offense is intended to be well-balanced and efficient. It really could turn out to be the perfect compromise between Carroll’s offensive philosophy and the crowd that shouted "Let Russ Cook."

For Carroll, who is in his 50th year of coaching and turns 70 this week, to still be open-minded enough to take this leap, is pretty impressive.

But when you really think about the concepts and the actual execution, it makes a ton of sense – and isn’t as extreme a move as it originally might have seemed.