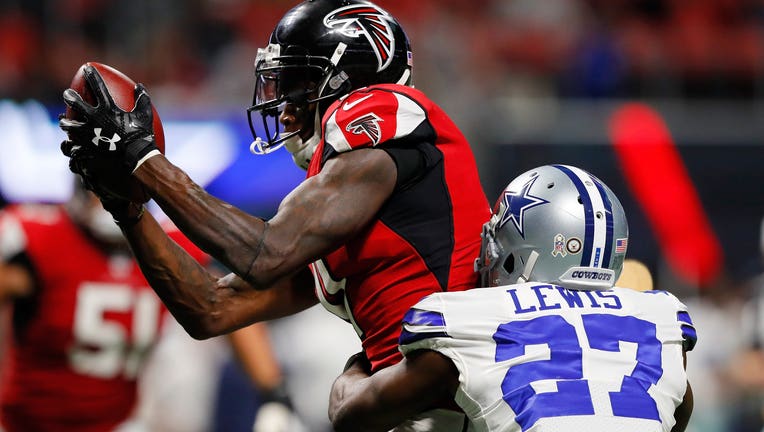 Julio Jones #11 of the Atlanta Falcons makes a catch over Jourdan Lewis #27 of the Dallas Cowboys in Atlanta, Georgia. (Photo by Kevin C. Cox/Getty Images)

According to an ESPN report, the Seahawks have had discussions with the Falcons about a possible trade for Julio Jones. And Russell Wilson and Jones have also been in touch, talking on the phone about the possibility of playing together.

I could give you every reason under the sun why this will not happen. But I think it’s worth a bigger-picture conversation about how we feel about this team, and its overall philosophy.

If we’ve learned anything about Pete Carroll and John Schneider over the years, it has always been their ability to find a happy medium of "going for it," while not sacrificing the future. The result has been a consistent winner – one that wins at least ten games every year and almost always makes the postseason. But it’s now been six or seven years since even reaching the NFC Championship Game.

The Julio Jones debate – from my perspective – comes down to how much, at this point in time, the Seahawks are willing to sacrifice their future, at least more than they normally would.

The Falcons already reportedly have an offer for a future first-round draft pick. The Seahawks don’t have a first-rounder in next year’s draft to trade, since they already traded it to acquire Jamal Adams last year. Would the Hawks be willing to part with a first-round pick in 2023 to make a deal like this happen, leaving them with no first-round picks for three straight years?

The Hawks have about seven million in space, and Jones is owed $15.3 million this year.

If they bring Jones here, the Hawks would have to restructure contracts like Russell Wilson’s. According to the Seattle times, if they turned Wilson’s base salary this season into a bonus, his salary cap hit would go up to $43 million in 2022 and $46 million in 2023. It would essentially back them into a corner.

So the question is – are we more willing to live on the wild side after the last seven years of contending, but never getting over the top? Is there more of an urgency now than ever before?

Because we know that with the current roster, the Seahawks are a contender to win an NFC West title and an outside contender for a Super Bowl championship like they are every year. But with the addition of Jones, they would rise to the level of a favorite in the division and top Super Bowl contender.

From where I’m standing, by refusing to trade Wilson this offseason, Pete Carroll has shown that he’s in win-now mode. There’s no more rebuilding with him.

We’ve also seen that a long-term future with Wilson isn’t guaranteed either.

So why not place all your chips to the center of the table and go "All In?"

I realize that a trade for Jones likely wouldn’t be the most prudent move when you’re planning for consistent success over the next five years. But have the priorities changed for this front office – and have your priorities changed as a fan?

It’s one of those times we look in the mirror and ask, are future consequences worth it to hoist a Lombardi Trophy and celebrate this season?

If your answer is yes, then Julio Jones should be a Seahawk this season, and we’ll worry about those challenges later.