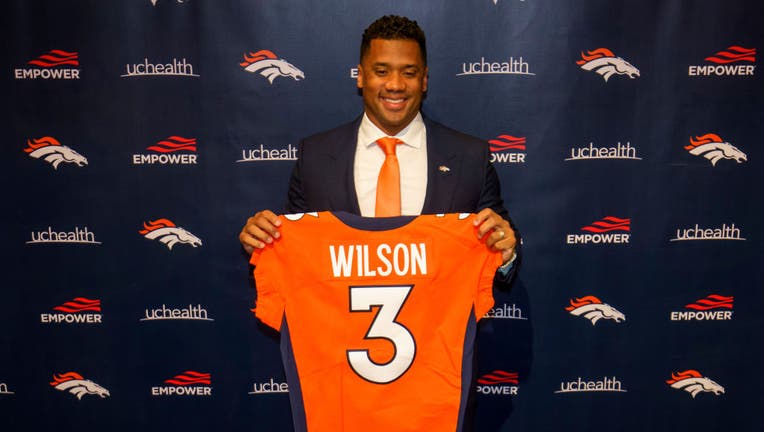 ENGLEWOOD, CO - MARCH 16: Quarterback Russell Wilson #3 of the Denver Broncos poses with his jersey after speaking to the media at UCHealth Training Center on March 16, 2022 in Englewood, Colorado. (Photo by Justin Edmonds/Getty Images)

While it’s likely inconsequential to the outcome of tomorrow’s game, I have LOVED the debate about how fans should react to Russell Wilson’s return to Seattle.

To which I say, first and foremost, "Do whatever the heck you want. You’re a fan. You paid for tickets. You do you."

Russell Wilson is one of the best athletes in Seattle sports history. He helped put the Seahawks on the map. He won a Super Bowl. He devoted a full decade to this city and this team, playing all but three games in ten full seasons. He donated millions of dollars through his foundation, donated his time at Childrens Hospital, impacted the lives of many.

And for all that, he should be cheered – on every day OTHER than tomorrow night.

Because tomorrow, Russell Wilson is on the other team. He is the opponent. And correct me if I’m wrong, a fan’s job is to make an opponent – especially an opposing quarterback - feel as uncomfortable as possible.

Russell has always talked about his legacy. He WANTS to be loved. He WANTS to be cherished. In fact, the reception Seattle gave Sue Bird earlier this week is likely the gold standard – the ideal scenario Wilson probably dreamed of at one point. To play an entire career in one city, to become Seattle’s beloved son.

Imagine the effect it would have on anyone to put so much effort into optics - into being admired - and then returning to a storm of nothing but hostility.

He’s a pro athlete, but he’s also human. And an attempt to unsettle an opponent’s mental state is perfectly fair game.

The idea of booing Russell Wilson, in my mind, has absolutely nothing to do with bad sportsmanship or a lack of class. Instead, it has everything to do with gamesmanship, and doing anything to make him feel uncomfortable in a setting that should be familiar. To that point, the Seahawks *should* also move the location of the playclock, because he’s been looking in one specific direction for that clock throughout his career.

Why give him the advantage of feeling like he’s playing at home or admired in any way, shape or form? I actually loved Pete Carroll’s take earlier this week.

Carroll gets it: Always compete.

Again, none of this takes anything away from how I feel about Russell Wilson any other day of the week. I’ll be the first to stand and applaud when he’s named to the Ring of Honor.

But tomorrow, he’s any other opposing quarterback.

And there’s nothing wrong with a little psychological warfare.