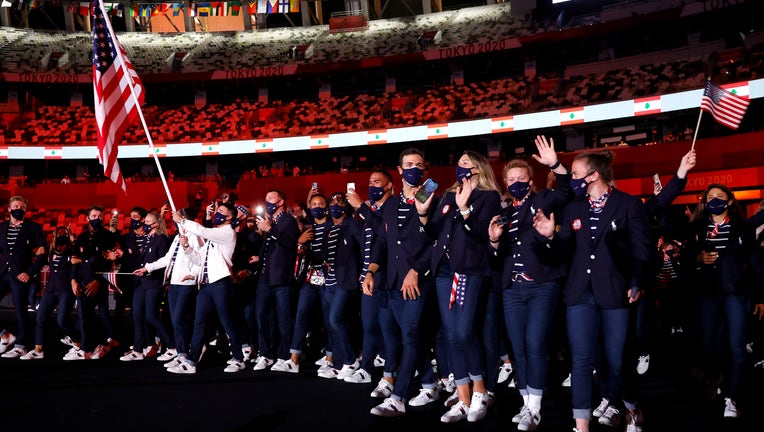 TOKYO, JAPAN - JULY 23: Flag bearers Sue Bird and Eddy Alvarez of Team United States lead their team out during the Opening Ceremony of the Tokyo 2020 Olympic Games at Olympic Stadium on July 23, 2021 in Tokyo, Japan. (Photo by Jamie Squire/Getty Ima

Admittedly, there’s an event that may have distracted you from Seahawks Training Camp the last couple weeks.

And while the footage restrictions are so strict that I’m too scared to show anything for fear of a violation, the games can’t end without a proper acknowledgment.

Frankly put, our area has so much to be proud about.

There’s nothing better than seeing Seattle’s Nevin Harrison change her Twitter profile to reflect winning her gold medal. The 19-year-old, who trains out of Gig Harbor, was the first person to win the Women’s 200 meter canoe sprint event – an event that was added as part of a push for gender equity.

Contrast that with these memories of Danielle Lawrie leading UW softball to a national title in 2009 – and 12 years later, coming out of retirement after having two daughters – and winning an Olympic medal for Canada.

Lawrie posted these photos on her Instagram account earlier today, announcing her retirement for good – but the amount of sacrifices she made to chase her dream, and accomplish it with other former Huskies Jenn Salling and Victoria Hayward, is just remarkable.

While we’re on the topic of Huskies, there was Kelsey Plum winning gold in the inaugural 3-on-3 women’s basketball event. Ali Aguilar and coach Heather Tarr winning silver with USA Softball, Matisse Thybulle winning bronze for Australia in men’s basketball, and C.T. Pan, outdueling six others in a seven-way playoff to win a bronze medal for Chinese Taipei.

It’s a shame that the Storm’s next home game isn’t until August 27, but I can’t get over how spoiled we are to have three of the five starters boast eight gold medals in Olympic play. Bird, obviously the greatest of all time, with a record five gold medals to add to her storied career.

On the men’s side, Bothell’s Zach Lavine posted this photo on Twitter last night, capping a gold medal performance as well.

OL Reign’s Quinn won a gold medal for Canada. And notice how I phrase this: Megan Rapinoe and Rose Lavelle won bronze for Team USA, just like the women’s gymnastics team won the silver medal, rather than losing the gold.

In fact, one of my favorite stories is a local Olympian who didn’t come home with any hardware at all. Auburn weightlifter Harrison Maurus finished just off the podium in fourth place in the 81 kilogram weight class – the best finish by an American man in Olympic weightlifting in 33 years. He lifted a career-best on the biggest stage of all and comes home with an experience he’ll never forget.

And lest we forget Whidbey Island-native Adrienne Lyle, who won her first-ever Olympic medal (silver) with her horse Salvino in Dressage.

That’s what the Olympics are all about: Stories and memories that last a lifetime.

Inevitably, I missed giving a local medalist a shoutout tonight. And I apologize because they all deserve their due.

But I’m just glad the games finally went on. Because some amazing individuals were given the chance to share their gift with us all.