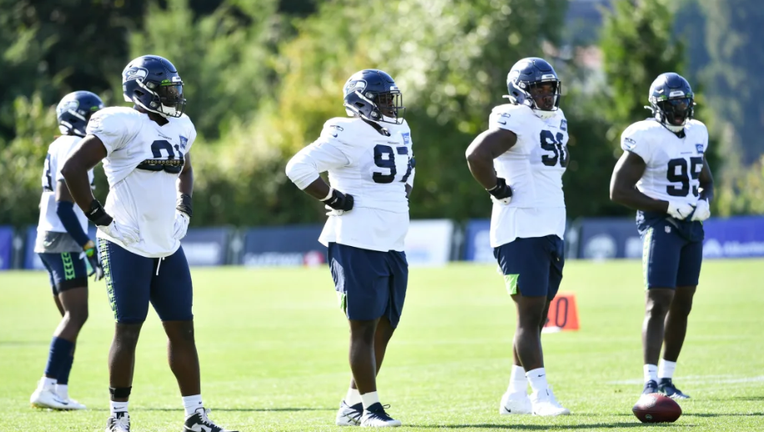 Many football players tend to say that they’re not concerned about what’s said about them. The criticisms. The underestimations. But I really hope the Seahawks defensive line is hearing all the noise.

This weekend, Jadeveon Clowney officially chose the Tennessee Titans. Many 12s viewed him as an essential piece to the puzzle, and spent the entire offseason lobbying for the Seahawks to spend the money to bring Clowney back. When the Clowney prospects looked bleak, the buzz shifted to Everson Griffin – but he went to Dallas instead.

There’s probably been more talk about defensive linemen the Seahawks don’t have than the ones they do. It’s the ultimate disrespect. Very few pundits actually believe this group will succeed.

Before Training Camp, Pro Football Focus ranked the Seahawks defensive line as the worst in the league. Even the local media is unimpressed, with Matt Calkins of the Seattle Times writing, quote, “If there’s a weak spot for the Seahawks, if there’s a vulnerable area for offenses to exploit, it’s on the D-Line.” Gregg Bell of the News Tribune tweeted, “their pass rush remains a problem.”

To guys like Bruce Irvin and Benson Mayowa, none of this is new. Irvin’s been countering this kind of disrespect since the Seahawks drafted him in the first round, and everyone went, “Who?” Part of a draft class with Bobby Wagner and Russell Wilson that was graded an “F” by a number of experts.

So this is their latest challenge. This is the latest slight, the latest insulting projection. The Seahawks had just 28 sacks last season – tied for 30th, basically at the bottom of the league. Despite the disappointment of Clowney or Griffin, you can’t say the front office didn’t make an attempt to address the issue: They used a second- and fifth-round draft pick on D-ends and brought Irvin and Mayowa back.

But the second-round pick, Darrell Taylor, isn’t healthy yet. And Irvin and Mayowa – despite their combined 15.5 sacks last season – aren’t seen as saviors.

There is some reason for hope though. Most fans couldn’t name more than one defensive lineman on the Carolina Panthers last season – after all, they didn’t have a single player finish with double-digit sacks. And yet, as a team, the Panthers finished with 53 sacks, the second-most in the league and almost twice as many as the Hawks. It proves that you don’t need a superstar name for a group to be successful.

Irvin understands that. He saw it first-hand last year. But hopefully the rest of the line truly believes it too.

And hopefully they’re seeing all the negativity – the less-than-flattering evaluations. Because I know this: Jarran Reed had 10 ½ sacks two years ago and is all about unfinished business after never finding a rhythm last season following a six-game suspension. L.J. Collier is on the record, fueled by his desire to prove he’s not a first-round bust – he never found any traction after a significant injury on the third day of Training Camp.

Rasheem Green is only getting better, as shown by his team-leading four sacks last year. And Irvin and Mayowa have a history of exceeding expectations.

Combine it all with the improved ability to cover on the back end thanks to a secondary that got upgrades at two key spots – combine it with one of the deepest and more talented linebacking corps in the league – and it just might be enough.

But frankly, I don’t want it to be just enough. I want this D-line to stare all the negativity right in its face and prove everyone wrong. To carry the burden of being a perceived “weak link” and eclipse all expectations.

Irvin and Mayowa have carried that chip their entire careers. So it wouldn’t surprise me if that’s exactly what we’ll see.