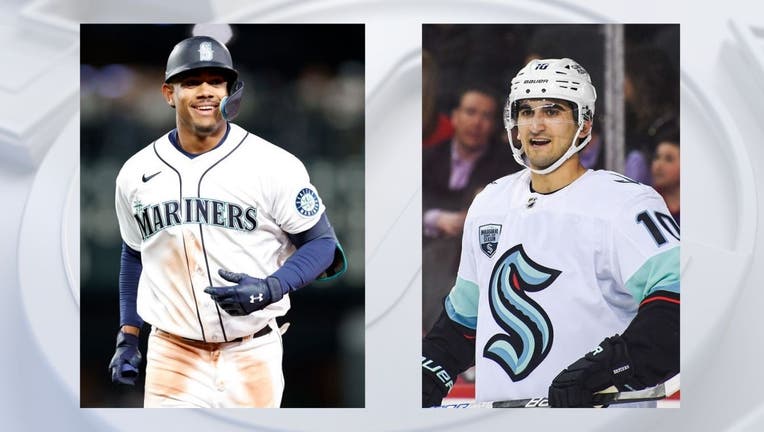 SEATTLE - This weekend was special - and not just because we had home games for practically all our in-season teams – the Mariners, Sounders, Kraken, Seawolves, Reign, and Husky baseball and softball.

It was special because two athletes in particular got to welcome themselves to their hometown crowds for the very first time.

Last night at Climate Pledge Arena, 19-year-old Matty Beniers played his first-ever game in Seattle. The teenager and second-overall pick in last year’s NHL Draft not only scored his first career NHL goal, but was also given first-star honors after the game. Not that we needed confirmation after watching him play in the Olympics and Frozen Four, but seeing him up close affirms the belief that this kid is special.

And that came one night after a sellout crowd welcomed 21-year-old Julio Rodriguez to Seattle at the Mariners home opener at T-Mobile Park – arguably one of the loudest cheers during pregame introductions.

And while the J-Rod show has struggled a bit out of the gate, we’ve seen a glimpse or two of the young outfielder’s magic this regular season, after one of the most impressive Spring Training resume’s we’ve seen in a while. It’s inevitable this youngster has all the tools to become a star at the Big League level, not to mention the charisma and confidence we’ll love to see over the years to come.

Remember this weekend, everyone. Because this was our introduction to the future of Seattle sports. Two guys, just north and south of 20 years old, who could potentially be the face of two pro organizations for years to come.

And I don’t take this lightly. Ken Griffey Junior was just 19 years old when he made his debut. Jordan Morris was 21. Sue Bird was 22. They’ve all become icons of the sports landscape of this city, which means it’s never too early to embrace the hype and enjoy watching the journey of two more young athletes who have now made their first starts for teams they’ll hopefully lead for many years to come.

Remember: When Griffey, Morris and Bird made their respective debuts, the Mariners had never reached the playoffs, the Sounders had never won an MLS title, and the Storm were just beginning.

In many ways, Beniers and J-Rod are getting in at the ground level too, in the Kraken’s first season and in a year where the M’s are trying to break a playoff drought that’s lasted 21 years. Of course it will take an entire team to accomplish such goals. But to have a couple athletes like this arriving right now to help their teams reach those heights? It makes it that much more meaningful.

So welcome to Seattle, Matty and J-Rod. We can’t wait to see what you can do – and where your teams can go now that you’re here.

The Seattle Kraken will get to see top draft pick Matty Beniers play for the team over the final 10 games of the season.