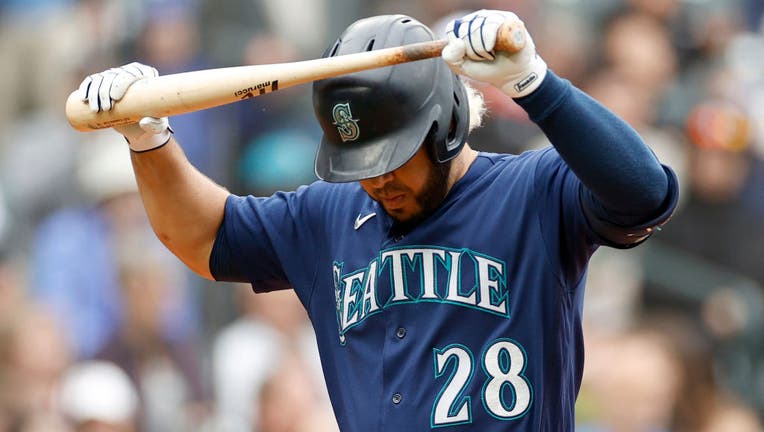 SEATTLE, WASHINGTON - JUNE 15: Eugenio Suarez #28 of the Seattle Mariners reacts after striking out during the fourth inning against the Minnesota Twins at T-Mobile Park on June 15, 2022 in Seattle, Washington. (Photo by Steph Chambers/Getty Images)

A fire alarm began blaring midway through the Seattle Mariners 4-0 loss to the Los Angeles Angels on Sunday afternoon.

Boy, what an apt metaphor.

While the alarm in the stadium was a brief annoyance, alarms for the baseball team itself were long overdue. We've just now reached the first day of summer and by all reasonable measure, the Mariners season is already over.

The Mariners lost four of five games this weekend to an Angels team that is just a week removed from a franchise record 14-game losing streak. They’re now 10 games under .500 – their lowest mark of the season – and are eight games out of the final Wild Card spot in the American League. They have the fourth-worst record in the American League.

Seattle was shutout in back-to-back games to end the home stand. It was the 10th time this season in just 68 games played that the Mariners have failed to score a single run. That’s tied with the Detroit Tigers – the worst offense in all of MLB – for the most in the league. They’ve been shut out four times in the last eight days alone. Only the Tigers (26-40), Kansas City Royals (23-42) and Oakland A’s (23-45) have worse records.

"Not the Father’s Day, nor the home stand, we were looking for. I guess the best way to put it was it rains, it pours," manager Scott Servais said after Sunday’s loss. "We’re in a slump right now, we’ve not played good baseball, for a number of different reasons. Not a whole lot to say about this one. Great crowd today. A lot of people out here, the sun was finally out. And unfortunately, we did not take advantage of anything."

A season that began with the promise of snapping a 20-year playoff drought now appears to be a total disaster before the midway point of the schedule.

If you make the assumption that even 86 wins would be enough to make the playoffs, the Mariners would have to play over .600 ball the rest of the way just to reach that mark. Only two teams in the AL (Houston Astros and New York Yankees) and five in all of baseball (New York Mets, Los Angeles Dodgers, San Diego Padres) are winning at that rate. Does this roster really feel capable of such a turnaround? For a team that hasn't managed to win even three straight games since late April, it would seem quite a stretch.

Despite winning 90 games last season and falling just shy of an elusive playoff appearance, advanced statistics indicated the team wasn’t nearly that accomplished. They had a run differential of -51 (697 runs scored, 748 runs allowed). Their Pythagorean W-L (a metric used as an estimate of a team's winning percentage given their runs scored and runs allowed) projected the Mariners to be a 76-86 team instead of a 90-72 team.

The Mariners were 33-19 last season in games decided by a single run, which led all the majors. That mark was buoyed by a bullpen that was among the best in baseball with 7.0 wins above replacement (WAR). Last season, the bullpen combined to go 45–27 with 51 saves and a 3.88 ERA with standout performances from Casey Sadler, Paul Sewald, Drew Steckenrider, Kendall Graveman and others. But bullpens are notoriously fickle and at least some regression from the group was to be expected. Graveman was traded last year and Sadler was lost for the year in spring training to a shoulder injury. Steckenrider struggled and was designated for assignment last week. Now Sergio Romo and Roenis Elías have been DFA'd as well.

The Mariners are just 12-11 in one run games so far this year.

The Mariners’ Pythagorean W-L for this season says they should be 32-36 through 68 games. Extrapolated out over 162 games, Seattle is projected to finish with a 76-86 record, which is exactly the team the Mariners were projected to have been last season given their run differential shortcomings.

What’s become woefully clear is the Mariners did not add nearly enough to the roster heading into this season. Robbie Ray – the reigning Cy Young Award winner – was the only significant free agent signing of note. Trades for Adam Frazier from the Pittsburgh Pirates, and Jesse Winker and Eugenio Suárez from the Cincinnati Reds have not been fruitful enough. The hope that Andrés Muñoz and Ken Giles would return from last year’s injuries and adequately supplement the bullpen has fallen short.

There’s only so much Servais can do with the options he currently has at his disposal. Servais isn't the problem in the Mariners' woes. But it seems near impossible for him to have any answers either given the state of the team.

Mitch Haniger has missed most of the season due to a bout with COVID-19 immediately followed by a high-ankle sprain. Tom Murphy has been out since May 7 with a dislocated shoulder. Kyle Lewis missed the first two months only to sustain a concussion after only four games back in the lineup. Jarred Kelenic hit .105 over his final 16 games before being sent down to Triple-A Tacoma. Justin Upton seems well over the hill in his small sample size with the team. Abraham Toro and Dylan Moore are utility players thrust into larger roles. Moore and Cal Raleigh – both batting sub-.200 – were batting as high as fifth in the order this weekend.

General manager Jerry Dipoto touted the depth of the roster and the ability throughout the lineup before the season began. Right now, it seems as if neither of those statements is true as Upton gets regular playing time, Toro bats .166, and Winker and Frazier sit in the bottom 15 of 158 qualified hitters across MLB in on-base plus slugging percentage.

The starting rotation has been a bright spot, especially with Ray finally rounding into form after a slow start to the year. But even with good starting pitching, the Mariners still can't find their way to victories.

More teams will make the playoffs in baseball than ever before with the postseason expanded to six teams per league. And yet, the Mariners appear destined to fall short – well short – of the postseason for a 21st straight season.