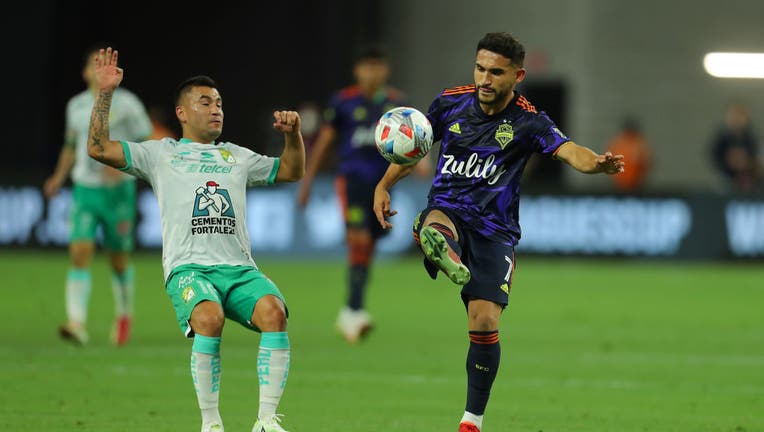 LAS VEGAS - Ángel Mena scored twice in the second half, including a penalty kick in the 81st minute, and Club León rallied for a 3-2 win over the Seattle Sounders in the Leagues Cup final on Wednesday night.

The eight-team, single-elimination competition between teams in Liga MX and Major League Soccer concluded with a Mexican side again lifting the trophy. The tournament debuted in 2019 with Cruz Azul winning the title and was canceled in 2020 due to the COVID-19 pandemic.

Seattle dominated the opening portions of the second half and took a 1-0 lead on Cristian Roldan’s goal in the 48th minute. Seattle had other opportunities, including Raúl Ruidíaz’s shot in the 56th minute hitting the outside of the post off a pass from Roldan.

But the momentum of the match changed with a set of substitutes by León in the 60th minute. Barely a minute later, Mena scored his first after being left unmarked at the back post.

Mena’s second goal came after he was taken down in the penalty area by Seattle defender Shane O’Neill on a careless slide tackle. Mena drew the foul and took the penalty, his shot beating the diving attempt of Seattle goalkeeper Stefan Frei.

Emanuel Gigliotti provided the capper for León in the 85th minute after a giveaway by Seattle’s defense.

Seattle substitute Nicolas Benezet scored off a deflection in the second minute of stoppage time to give the Sounders hope. Ruidíaz got a chance at the top of the penalty area in the final seconds but his left-footed shot was wide.

It is the first international tournament title for León, which sits fifth in the Liga MX standings. León defeated Sporting Kansas City and Pumas to reach the final.

Seattle beat Tigres and Santos Laguna in the tournament. The Sounders are second in MLS’ Western Conference.