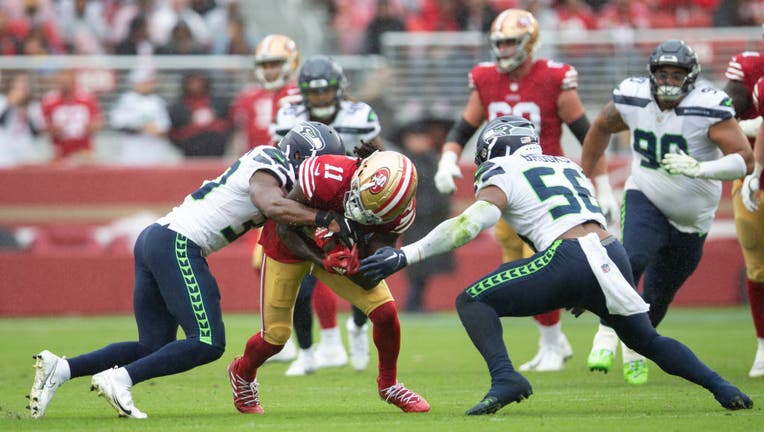 SANTA CLARA, CA - SEPTEMBER 18: Brandon Aiyuk #11 of the San Francisco 49ers runs after making a catch during the game against the Seattle Seahawks at Levi's Stadium on September 18, 2022 in Santa Clara, California. The 49ers defeated the Seahawks 27

That's how defensive coordinator Clint Hurtt described the issues the Seattle Seahawks had in the first half of last week's 27-7 loss to the San Francisco 49ers.

The Seahawks allowed 20 points on 259 yards of total offense and 123 yards rushing in the first half. Missed assignments, missed tackles, and penalties – along with an anemic showing from the offense – helped the 49ers cruise out to a big early lead.

The most notable error came when linebacker Darrell Taylor missed a tackle on 49ers receiver/running back Deebo Samuel in the backfield that would have gone for a loss. Instead, Samuel took full advantage of the second chance in cutting through Seattle's defense for a 51-yard gain.

"Right now, we are playing fast in the game, we are playing aggressively, and are throwing our body, but we are not wrapping up," Hurtt said. "We are leaving our feet too much, and these are all of the things that players know that we’ve talked about that has to get fixed. We have to continue harping on it."

The 49ers finished with 189 yards rushing in the game overall on 45 attempts. If you remove Samuel's run, the 49ers would have averaged just 3.1 yards per attempt over 44 runs in the game. That number isn't nearly as problematic as the 4.2 yards per rush with it. However, Hurtt doesn't want to think about the situation that way.

"I don’t like the what-if game," Hurtt said. "At the end of the day, they had what they had, I give them credit, and kudos to them, but we have to fix the issue. I don’t want them to have over 100 (yards) and they were too damn close to (200). That’s a major problem that we are working to get fixed."

The defense hasn't been a debilitating problem through two games, but there are things of concern. The tackling that was a concern for the reserves playing throughout the preseason has shown to be a bit of an issue with the starters as well now that the regular season has started.

Penalties were also a sizable issue last week. The Seahawks had 10 penalties for 106 yards being called overall with six penalties (and one declined) going against the defense for a total of 83 yards.

"If we just take the penalties out of our play, we gave them four first downs," head coach Pete Carroll said. "Those are huge plays where we are off the field and sitting down. And we don’t have to do anything different. If there was one thing, I would clean that up first. There’s other things we are working on, but those were the significant plays. It’s like a 40-yard catch that didn’t happen. Those are huge field swings. We have to do better there."

Taylor has had a rough start to the season for Seattle. Coming of 6.5 sacks last year, Taylor was viewed as a player set to make a leap in his second full season. But through two games, Taylor has been mostly a non-factor. He has just three total tackles and two quarterback hits. He's also been a liability in run defense as both the 49ers and Denver Broncos found space to run by attacking his edge of the line of scrimmage.

"He’s learning, he’s learning," Carroll said of Taylor. "I think as we are adjusting in this early part of the season, we’re trying to figure out how to best use our guys, proportionately and rushing versus playing on early downs and stuff like that. So, we’re working on that. He can do everything. We particularly like him as a rusher coming off the edge because of his speed and all that. We’re learning. He’s learning, we’re learning."

Hurtt's thoughts on Taylor were a bit more direct.

"I addressed that stuff accountability-wise with him privately," Hurtt said. "What I will say is that there are things that he wants to play better. We have to continue to coach him better and clean up some details for him, but obviously, we expect great things out of him collectively as a group. There are plays that he’s made, but we need the consistency to be right is what it is."

With Taylor struggling, Carroll said that Darryl Johnson, acquired off waivers from the Carolina Panthers during roster cuts late last month, will get more opportunities as a part of the defense.

"He’s made a really positive impression. We’ll see more of him," Carroll said.

"He’s a real natural football player and that’s why he looks good on special teams. There’s not many 260-something pound guys running down the kickoffs and punts and making plays too. He got sense and awareness and he’s also a really good technician at the line of scrimmage. He can play 3-technique, 5-technique, or 9-technique. He can do them all and he just gets in there and he just has been raised right. He’s got the real long arms that he has, and he uses his length. And the aggressiveness shows up on the special teams from before and it showed up in the game."

Hurtt said the issues they've had so far are not due to their change in scheme this year. Seattle has moved to more of a 3-4 base alignment instead of the 4-3 under front they've employed under Carroll for most of his time with the Seahawks. While there are some adjustments that come from making the switch, Hurtt said that when it comes to stopping the run the scheme changes are minimal.

"A lot of it gets made way too much of," Hurtt said. "Whatever front structure you play, your big guys have to put hands on blockers to give the guys on the second level a chance to be able to go and play football. And vice versa, the guys on the second level, there are times where they have to strike blocks and have to be able to fall back and play off of them too. All of those things working together and complementing one another, we can clean up and do better."

Hurtt thought the defense played much better in the second half of the loss to the 49ers.

"When we hit halftime, to be able to go in and make the changes that we needed to, identified to the guys where the issues were and where the mistakes were made and take ownership of that. Then in the second half, we were much more consistent with those things that we were doing right down to down," Hurtt said.