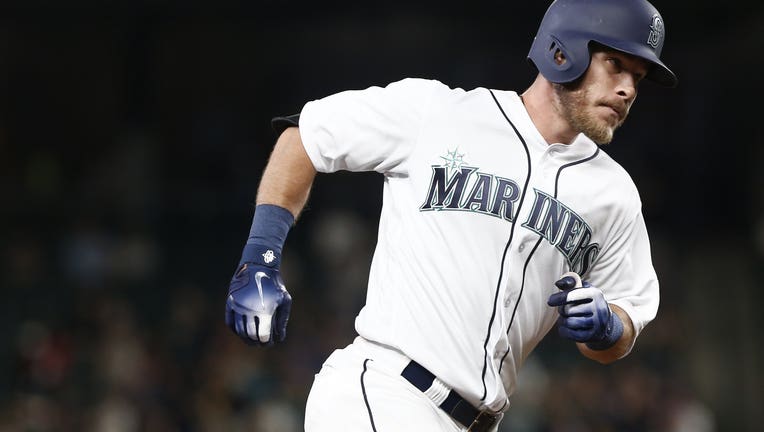 SEATTLE (AP) — Chris Herrmann hit his first home run for Seattle and Marco Gonzales pitched six solid innings to lead the Mariners to a 4-1 victory over the Los Angeles Angels on Thursday night.

Gonzales (9-5) gave up five hits while striking out seven in a 102-pitch outing. The lone run he gave up was Kole Calhoun's sacrifice fly in the fourth inning to tie the game at 1.

In the fifth, Guillermo Heredia's line drive over Justin Upton's head in left field for an RBI double gave Seattle the lead back at 2-1.

Edwin Diaz struck out the side in the ninth to lock up his major league-leading 34th save.

The Mariners have not lost a home series since May 6, when they dropped two of three games to the Angels. They are 6-0-3 during that span.

Seattle right-hander Felix Hernandez insists he feels much better before his scheduled start Friday against Colorado than he did nearly a week ago.

Hernandez tweaked his back during a workout in Baltimore. It tightened on him before his start Saturday against Kansas City - one in which he surrendered three earned runs before recording an out in a 6-4 victory.

With the help of heat and ice packs, and more stretching, Hernandez's back has felt better this week. He even threw an abbreviated bullpen session.

"I am better today - more loose," Hernandez said. "I will be fine."

What did Japanese star Shohei Ohtani get on the day of his 24th birthday Thursday in Seattle?

He got a seat on the bench against Gonzales, a left-hander. With Albert Pujols serving as the designated hitter, Jefry Marte got the start at first base after being activated from the 10-day disabled list earlier in the day.

"We've got Marte back who we like against left-handed pitchers," Angels manager Mike Scioscia said. "Shohei will definitely get his looks. He is fine."

Ohtani struck out in the ninth inning as a pinch hitter against Diaz.

Angels: It appears that shortstop Andrelton Simmons and center fielder Mike Trout might remain the Angels' 2-3 hitters for the time being. With a revamped lineup, the Angels produced 17 runners in scoring position Wednesday. "That is the pressure we need to apply to teams," Scioscia said. ... To make room for Marte, the Angels sent outfielder Jabari Blash to Triple-A Salt Lake.

Mariners: Catcher Mike Zunino (left ankle) was placed on the 10-day disabled list with a bruised left foot. He rolled his ankle late in Seattle's 7-4 loss Wednesday running the basepaths and was walking around in a boot in the clubhouse Thursday. David Freitas was recalled from Tacoma to serve as the backup catcher behind Herrmann. ... Outfielder Mitch Haniger was scratched from the starting lineup because of a bruised right knee. Heredia took his place. ... Right-hander Erasmo Ramirez (right shoulder) threw a successful bullpen Wednesday. Servais said he will throw another one before facing live hitters a couple of times. After that, he will have a rehab assignment.

Rockies: This will be a big moment for right-hander German Marquez (6-8, 5.14 ERA), who faces off against one of his famous Venezuelan countrymen in Hernandez. He has never faced the Mariners, but is 2-0 in interleague play. Marquez is coming off arguably his best start of the season Saturday in a 3-1 win over the Los Angeles Dodgers (8.0 IP, 1.0 ER, 9.0 strikeouts).