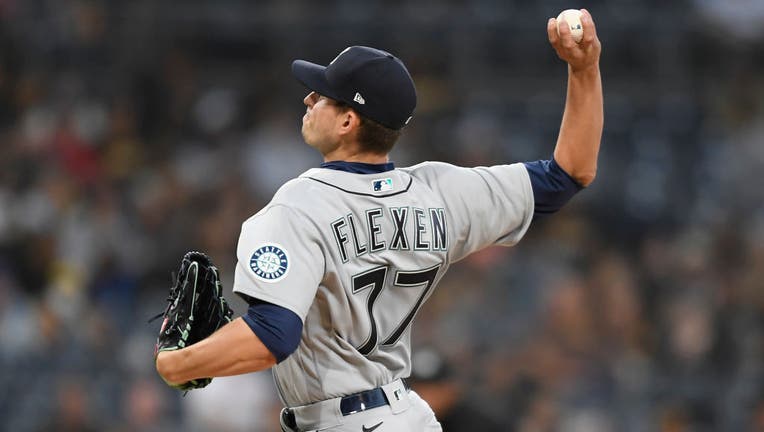 SAN DIEGO, CA - MAY 21: Chris Flexen #77 of the Seattle Mariners pitches during the first inning of a baseball game against the San Diego Padres at Petco Park on May 21, 2021 in San Diego, California. (Photo by Denis Poroy/Getty Images)

SEATTLE - Chris Flexen threw seven shutdown innings and was backed by home runs from Tom Murphy and Jacob Nottingham, and the Seattle Mariners beat the Texas Rangers 5-0 on Thursday night.

Flexen rebounded from his worst start of the year with his best performance since returning from a stint in South Korea. The big right-hander scattered three hits, and only Willie Calhoun advanced past first base when his slicing triple evaded Jarred Kelenic’s diving attempt in the sixth inning.

Flexen (5-2) struck out six and walked only one. His performance was a stark turnaround from his last outing against San Diego when Flexen failed to make it out of the second inning, giving up 10 hits and eight earned runs while recording just five outs.

It was an outlier in what otherwise has been a solid return for Flexen from pitching overseas. He’s allowed one earned run or less in five of his nine starts.

Rafael Montero and Keynan Middleton finished off Seattle’s fourth shutout of the season.

Seattle’s bats continued to be sporadic, but there was enough offense in moments. Murphy and Nottingham went deep back-to-back in the third inning off starter Kolby Allard.

The Mariners didn’t get another hit until Ty France’s broken-bat single leading off the seventh, but it was the start of a three-run outburst. Jack Mayfield greeted reliever Brett Martin with a two-run double and Mitch Haniger added an RBI single.

Haniger nearly hit his 14th homer of the season in the first inning, only to have it stolen at the wall by Adolis García.

The two solo homers were the only hits allowed by Allard (1-1) in his first start of the season. Allard had not pitched more than three innings in a game this season, but went four innings and struck out four.

Just A Bit Outside May 27

Q13 FOX is excited to welcome a new face to our sports team on this episode of Just A Bit Outside.

Santiago has pitched with four teams in the majors. He split the 2019 season between the New York Mets and Chicago White Sox, appearing in 19 total games going 1-1 with a 6.68 ERA.

Rangers: RHP Kohei Arihara underwent surgery Thursday to remove an aneurysm in his right arm. The surgery was performed by vascular surgeon Dr. Gregory Pearl in Dallas and removed the aneurysm and repaired the artery. The Rangers said Arihara will have a follow-up visit in about a month with no throwing in the interim. ... RHP Hunter Wood returned to his home in Arkansas for the birth of his fourth child and will be further evaluated on his return.

Mariners: LHP Marco Gonzales (forearm strain) is expected to return to the rotation next Tuesday against Oakland, manager Scott Servais said. Gonzales will be a limited pitch count to start.

Rangers: RHP Jordan Lyles (2-3, 5.94) had thrown six innings in each of his past two starts. The Rangers have won four of the past five games started by Lyles.

Mariners: LHP Justus Sheffield (3-4, 5.11) looks to rebound after a poor start in his last outing against San Diego. Sheffield walked a season-high five and matched a season-high with five earned runs allowed in a loss to the Padres.