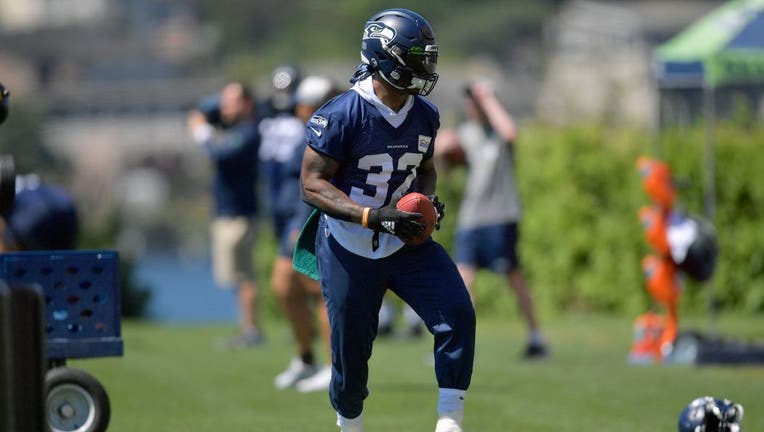 Seattle Seahawks running back Chris Carson has still not been cleared to return to football following surgery to fuse parts of his neck last season. While head coach Pete Carroll has cast some doubt on a possible return, Carson is still pushing to get back.

"Oh, we still going right now," Carson told Jonathan Adams of Heavy.com. "I see myself playing until I feel like stopping. My mindset is never to give up. So, I’m staying positive like I said, and continue to fight and get back onto the field."

Carroll said on Thursday that Carson had come in for an evaluation two weeks ago with the hope of having him return to action. They did not get clearance to do so at that point. Another evaluation is coming in two weeks from now to see how he's progressing.

"That could have happened. That didn't happen," Carroll said. "So now we're into the next phase of it. We'll see what happens here. Just hold out good hope because he's worked really hard and he really wants to come back and all of that. But I can't tell you anything for certain now at this point. The fact that we could have known, given us the green light, here we go. That didn't happen."

Carson had surgery to fuse a disc in his neck that was causing him ongoing discomfort. Despite appearing in just four games, Carson spent many weeks trying to get back on the field without success. Ultimately, it was decided that he needed to have surgery.

Carroll said that Carson is still dealing with some range of motion issues and is continuing to work on strengthening his neck and improving flexibility.

"He still doesn't have full range in a couple areas of things that he's got and he's right at the cusp of getting there," Carroll said. "And the time is on him now, you know, can you beat the clock here a little bit. So he's close. He's really close. And he knows that and so, you know, he's frustrated that he couldn't show it this time around. But he knows, OK, here's our next loop. And so he's going for it just like our guys know how to do and we're all pulling for him."

The Seahawks have had multiple players have to retire due to neck injuries in recent years. Safety Kam Chancellor, defensive end Cliff Avril, wide receiver Ricardo Lockette and defensive end Branden Jackson are among those who were forced to retire because of neck injuries. While Carson's injury isn't the same as those players had dealt with, it is still a sensitive area that needs to be secure to play football safely.

Carson said there isn't currently a timetable on his ability to return to the field. He insisted his intention is to keep playing and he'll keep working in order to be able to do so.

"Not trying to rush it, I’m just trying to take it one day at a time," Carson said of his status. "Just keep rehabbing, keep getting better. Keep building strength and then go from there. But like I said, there’s no timeline for me."

In an interview Corbin Smith of SI.com, Carson said he hasn't considered retirement because of the injury.

With Carroll's comments this offseason expressing uncertainty about Carson's future, it wasn't a surprise when the team drafted a running back  – Ken Walker III – in the second round of this spring's NFL Draft. If Carson is ultimately unable to play, the Seahawks needed depth at the position behind Rashaad Penny, a running back who has had injury issues through his career as well.

Carroll's words on Thursday felt somewhat more reflective of the past for Carson than optimistic of the future. However, Carson and the Seahawks have seven more weeks before the start of training camp to see if he can clear the necessary hurdles to return to the field.

"We had a real good chance to hang out with him and feel him, and he’s concerned because he wants to play," Carroll said. "He loves the game, and he’s a worker, you know. He wants to work and push and all that, [but] there’s some things that he was still a little bit restrained to do. So he wasn’t quite ready to do everything at that time, and it’s just hard on him."

"He’s been one of my favorite Seahawks ever. I’ve loved what he stood for and what he brought, and we’d love to have him back again. He’s a very special player and a very special competitor. We’ll keep our fingers crossed."

While not closing the door on the chances of a return to action as of yet, Seattle Seahawks head coach Pete Carroll said that running back Chris Carson has not yet been cleared to play after neck surgery late last year.