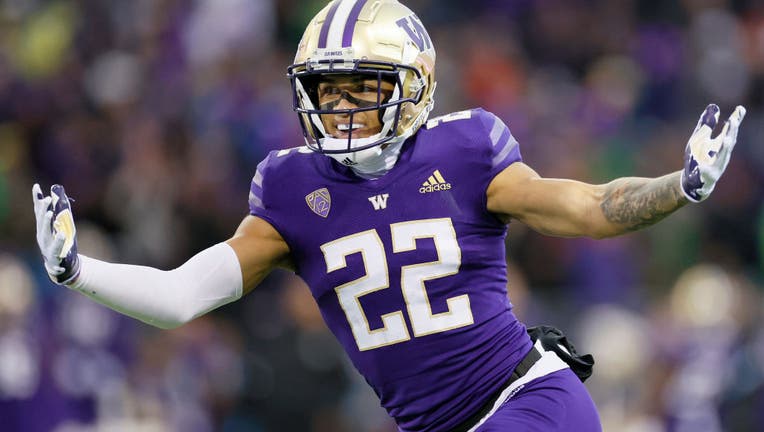 SEATTLE, WASHINGTON - NOVEMBER 06: Trent McDuffie #22 of the Washington Huskies celebrates a safety against the Oregon Ducks during the first quarter at Husky Stadium on November 06, 2021 in Seattle, Washington. (Photo by Steph Chambers/Getty Images)

RENTON, Wash. - University of Washington cornerback Trent McDuffie was selected by the Kansas City Chiefs in the first round in the NFL Draft.

The Chiefs traded up in a move with the New England Patriots to get McDuffie with the 21st overall selection.

McDuffie, 21, was a three-year starter for the Huskies. After being named a second-team All-Pac-12 selection in 2020, McDuffie was a first-team All-Pac-12 performer during his final year at Washington.

McDuffie is the third cornerback to be selected in the draft behind LSU's Derek Stingley Jr. (No. 3, Houston Texans) and Cincinnati's Ahmad "Sauce" Gardner (No. 4, New York Jets).

Fellow Washington cornerback Kyler Gordon is also expected to be an early round draft pick.

The last time the Chiefs selected a cornerback in the first round of the NFL Draft was in 2015, when they drafted another UW product in Marcus Peters.