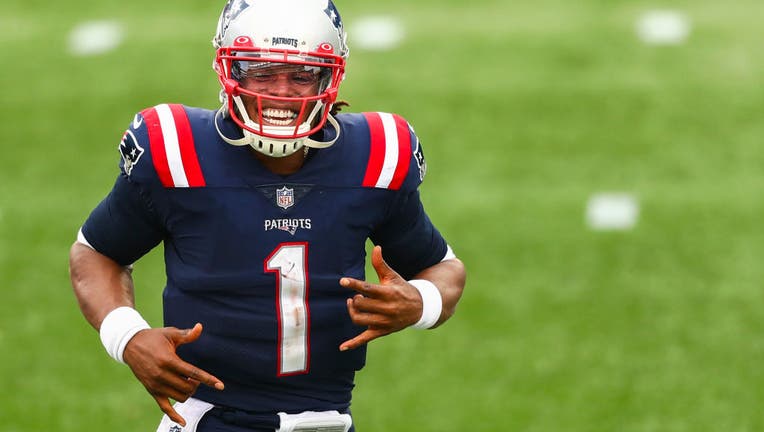 Cam Newton #1 of the New England Patriots reacts after a win over the Las Vegas Raiders at Gillette Stadium on September 27, 2020 in Foxborough, Massachusetts. (Photo by Adam Glanzman/Getty Images)

The NFL postponed this week's game between New England and the Super Bowl champion Kansas City Chiefs after “positive COVID-19 tests on both teams.” ESPN reported on Saturday that Patriots quarterback Cam Newton was among those testing positive.

The NFL said on Saturday that the game, originally scheduled for 4:25 p.m. EDT on Sunday, will be played on Monday or Tuesday, a move that would be possible only if there is no wider spread of the disease on the rosters.

The Patriots confirmed that a player has tested positive but did not reveal his name. Newton's agent did not immediately respond to a message from The Associated Press seeking confirmation.

The only known Chiefs player to test positive is quarterback Jordan Ta'amu, a member of the practice squad who has not appeared in a game but would have spent time in meetings with Super Bowl MVP Pat Mahomes and the team's other QBs.

How leagues are handling college football season amid COVID-19 pandemic

College football has been significantly impacted by the coronavirus pandemic.

It is the second game this weekend that has been affected by COVID-19. After an outbreak on the Titans, the matchup between Pittsburgh and Tennessee was postponed — originally for a day or two, and then until Oct. 25 as the positive tests accumulated.

To fit it in, the Steelers' game against Baltimore that day was pushed back to Nov. 1.

The Patriots had been planning to fly to Kansas City on Saturday afternoon. Instead, players left the facility to await further instructions. The team said in a statement that the COVID-positive player has entered self-quarantine and that players, coaches and staff who were in close contact with him were tested Saturday morning and all were negative.

Earlier this week, Patriots defensive back Devin McCourty said the league might have grown overconfident after making it through training camps and the first two weeks of the season without a major outbreak.

“But at the end of the day, we are in a pandemic," he said. "So what happened in Tennessee, although it kind of shocks us, it’s not really surprising. I think we all knew at some point we might get some positive tests.

“So it’s like, ‘We got this,’” he said. "I think this is just a little shocker, but it’s also a wakeup call, like ‘Hey, the virus is still here and it will affect any and everybody. It doesn’t care that we’re trying to play football.’”