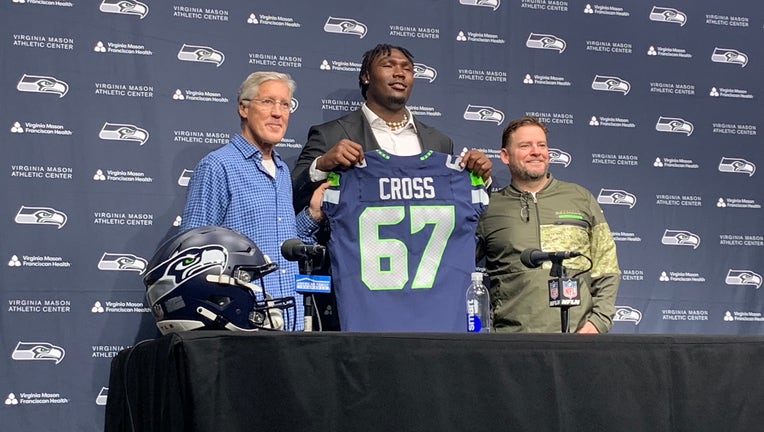 RENTON, Wash. - Out of all the interviews Charles Cross had during the NFL Combine, the one he had with the Seattle Seahawks was the one that resonated the most.

"I say it felt right," Cross said during his introductory press conference on Friday. "We had great conversations. It made it fun, kept it interesting. That was like my favorite interview at the combine."

Cross became the first round choice of the Seahawks on Thursday night when they selected him with the ninth overall pick. Cross was attending the draft in Las Vegas when he was selected.

"It was very exciting to hear my name called," Cross said. "I'm very glad they took a chance on me just being part of this organization. It's a blessing. I'm just excited to come in and compete and get ready to work."

Cross traveled to Seattle on Friday morning as the team introduced him to assembled reporters. Cross had his new jersey on hand as he will wear the same No. 67 that he wore during his tenure at Mississippi State.

General manager John Schneider mentioned that Cross was the only top tackle that did all of the testing during the NFL Combine and pro day workout process, which was something that made an impression on them.

"This is a player, a prospect that didn't necessarily pick and choose. He went for it. He wanted to show everybody he's a competitor in every aspect," Schneider said.

As they said on Thursday night, Carroll reiterated their belief that Cross won't have any problems making the transition to their scheme from the "Air Raid" style offense he ran under Mike Leach at Mississippi State.

"We have no question that he's gonna be able to make a great transition," Carroll said.

"He was in the midst of Coach Leach's program and made that transition quickly and showed what kind of a pass protection guy he could be in the most challenging conference in the SEC. I don't see any problems here. I think everything's gonna be just fine.

"They ran the ball effectively when they did (run it) they just don't do it as much as we will and other teams maybe in the league."The skills that are necessary, to move your feet and to get off the ball and come off with force, get to the second level, all of those things come very, very natural for Charles and he's not gonna have any problem at all."

Carroll also noted that Cross was highly regarded by new offensive line coach Andy Dickerson, who takes over the role full-time after joining the club as their run game coordinator last season.

"As John goes through the whole process, he really likes to feel the buy-in from the coach on the kid like we did here and Andy was a big fan," Carroll said. "I think the transition is going to be seamless. The things that Andy stands for and in the way he approaches our run blocking and the past protection stuff, we just see it being a great fit."

The Seahawks now prepare for day two of the draft, which included the second and third rounds. Seattle holds three picks currently on day two, including consecutive picks in the second round at No. 40 and No. 41 overall.

The Seattle Seahawks got some much-needed help to bolster their offensive line by selected Mississippi State tackle Charles Cross with the ninth overall pick of the NFL Draft on Thursday night.