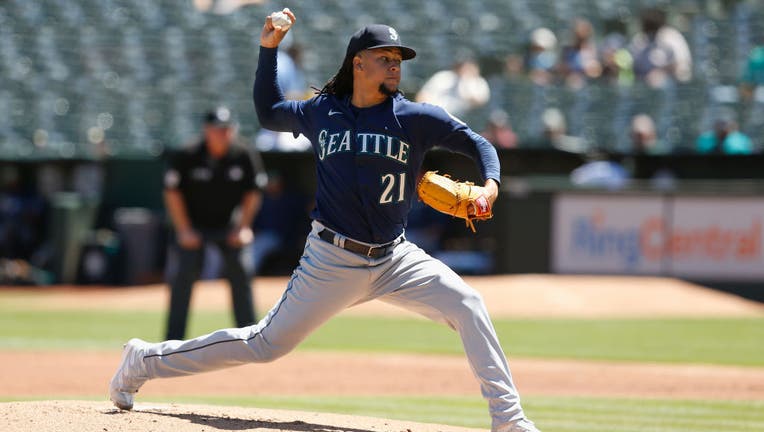 OAKLAND, CALIFORNIA - AUGUST 21: Luis Castillo #21 of the Seattle Mariners pitches in the bottom of the first inning. against the Oakland Athletics at RingCentral Coliseum on August 21, 2022 in Oakland, California. (Photo by Lachlan Cunningham/Getty

SEATTLE - Right-hander Luis Castillo agreed to a $108 million, five-year contract with the Seattle Mariners that starts next season, giving up a chance to become a free agent after the 2023 World Series.

The deal announced Saturday includes an option for 2028 that could make the agreement worth $133 million for six seasons.

Castillo was the big trade deadline acquisition for the Mariners when they got him from Cincinnati. The hope was Castillo would be the difference in Seattle’s push to end the longest playoff drought in baseball and that the Mariners could convince him to stick around longer.

"Luis has been one of the top pitchers in MLB over the past six seasons," Mariners President of Baseball Operations Jerry Dipoto said. "He is a dynamic power pitcher in the prime of his career with a track record of consistency. Bringing him to Seattle represented a key moment in our ongoing efforts to build a championship roster. Similarly, this deal illustrates our continued commitment to both the present and future of this team."

Castillo has a $7.35 million salary this year, and his new deal includes a $7 million signing bonus payable within 60 days of the contract’s approval by the commissioner’s office. He gets salaries of $10 million in 2023 and $22.75 million annually from 2024-27.

Seattle has protection against an injury to the UCL in his pitching arm, a $5 million conditional option for 2028 that can be exercised only if from 2025-27 he is on the injured list for more than 130 consecutive days due to Tommy John surgery or an operation stemming from damage to the ligament.

If the conditional option speifications are not met, the contract includes a $25 million option for 2028 that would become guaranteed if Castillo pitches at least 180 innings in 2027 and an independent physcian determines he doesn’t have an injury that would cause him to start 2028 on the injured list.

RELATED: Royals take on the Mariners in first of 3-game series

Castillo was selected to the National League All-Star team in July for his second All-Star selection.

Keeping Castillo creates a formidable rotation for Seattle into the future. Robbie Ray was Seattle’s big signing last offseason, the reigning AL Cy Young Award winner getting a $115 million, five-year deal. Young right-handers Logan Gilbert and George Kirby have shown flashes of dominance throughout this season. Gilbert is under club control through 2027 and Kirby through 2029.

Castillo is the second major deal for the Mariners in the past month after locking up rookie slugger Julio Rodríguez last month to a $209.3 million, 12-year contract.