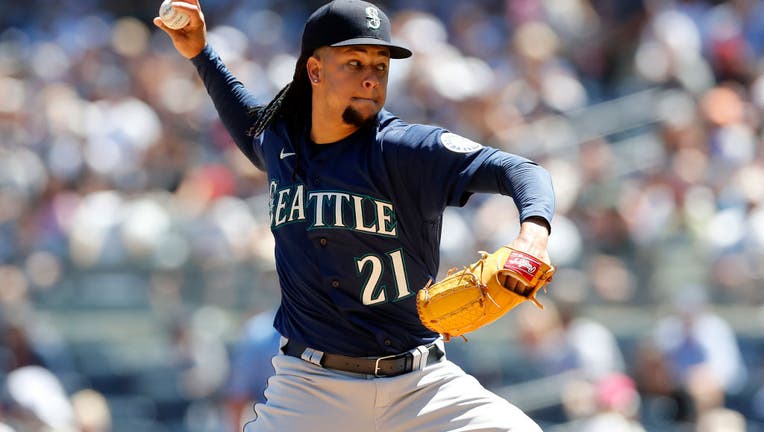 Luis Castillo #21 of the Seattle Mariners pitches during the first inning against the New York Yankees at Yankee Stadium on August 03, 2022 in New York City. (Photo by Jim McIsaac/Getty Images)

NEW YORK - Luis Castillo pitched five-hit ball into the seventh inning in his Seattle debut, and the Mariners used a fast start to beat Gerrit Cole and the New York Yankees 7-3 on Wednesday.

Castillo (5-4) struck out eight in 6 2/3 innings in his second start in the Bronx in less than a month. The right-hander allowed three runs and walked three.

The 29-year-old Castillo pitched seven sparkling innings for Cincinnati at New York on July 14. The Reds traded the ace to the Mariners on Friday night for four prospects.

Castillo got some help from shortstop J.P. Crawford, who made a pair of impressive defensive plays.

Crawford cut down Isiah Kiner-Falefa with a strong relay throw when he tried to score from first on a double by Kyle Higashioka. Crawford also speared a 106.5 mph liner by Aaron Hicks to open the fifth while shifted to the right of second base.

Castillo retired 10 straight before issuing consecutive walks to DJ LeMahieu and Josh Donaldson in the sixth. But he got out of the jam by striking out Josh Donaldson on a slider and retiring Andrew Benintendi on a liner to second.

Castillo cruised into the seventh at 95 pitches and easily got the first two outs. He allowed a single to Kiner-Falefa and exited after Higashioka hit a two-run homer.

Cole was booed at various points of the first when Ronald Marinaccio began warming up. He allowed seven hits, struck out eight and walked one in six innings.

The Mariners took a 3-0 lead when Suárez hit a first-pitch slider into the seats in left for his second straight homer in the opening inning. Santana followed with his 10th homer, driving a 3-1 fastball deep to right-center field.

After Seattle hit back-to-back homers for the second time this season, Crawford singled before Kyle Lewis struck out. Kelenic then made it 6-0 by reaching the short porch in right for his first homer since returning from spending over two months in the minors.

Mariners: LHP Robbie Ray (8-8, 4.11 ERA) opens a three-game series against the Angels on Friday in Seattle.