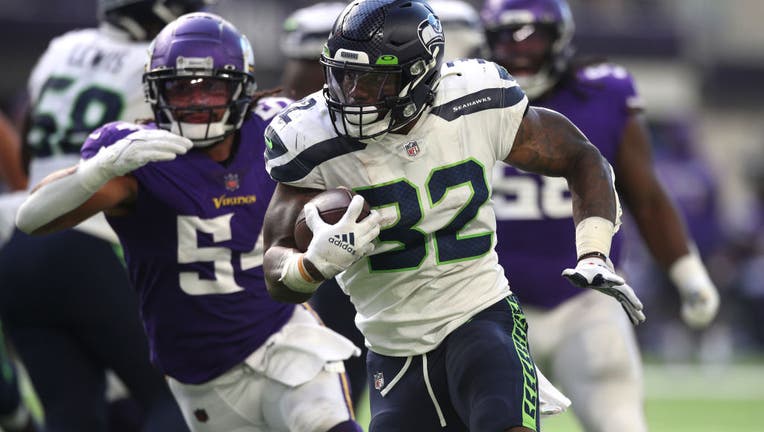 RENTON, Wash. - Seattle Seahawks running back Chris Carson returned to practice Wednesday after coming off injured reserve, but with no guarantee he’ll play against Green Bay.

Meanwhile, quarterback Russell Wilson remained on track to return against the Packers after missing three games due to finger surgery.

Coach Pete Carroll said he remains hopeful Carson will be able to play, but his progress in his return from a neck issue that has sidelined him since Week 4 will be evaluated daily between now and Sunday.

"He’s got to make it through the week of work and like we always talk about, it’s a one day at a time thing," Carroll said. "He’ll get banged around a little bit tomorrow. But just see how he responds to it. It’s pretty important to get a good beat on this one. He’ll feel good physically, run around and all that because he’s in great shape and working really hard."

Seattle has remained vague about Carson’s condition, saying it’s an issue the team has known about and that has flared up at times, but providing few details. This is the longest Carson has been sidelined by the ailment as Seattle chose to place him on injured reserve and gave him ample time for recovery.

Carson started the first four games of the season and had three rushing touchdowns even as Seattle’s run game as a whole has been disappointing. Carson rushed for a season-high 91 yards in Week 1 against Indianapolis but had just 30 yards on 13 carries in Week 4 against San Francisco, the last game he played.

Alex Collins has been the primary option at running back since Carson went out and posted Seattle’s first 100-yard rushing game since the 2019 season in Week 6 at Pittsburgh. Collins has also dealt with a few injuries and Rashaad Penny has been mostly ineffective in his limited action since returning from injured reserve.

Coming out of its bye, Seattle ranks 21st in the league averaging 102.9 yards per game rushing.

Seattle is also hoping rookie second-round pick Dee Eskridge will be a consideration for playing this week after being out since Week 1 due to a concussion. Eskridge was also designated for return to practice from injured reserve earlier this week.

Seattle had high hopes for how Eskridge’s speed could be used in its offense but he’s been limited to one catch and two rushes in the opener against Indianapolis.

"We expect him to feel good," Carroll said. "We’ve cleared our guys. We expect them to do well and all of that, but still got to wait."