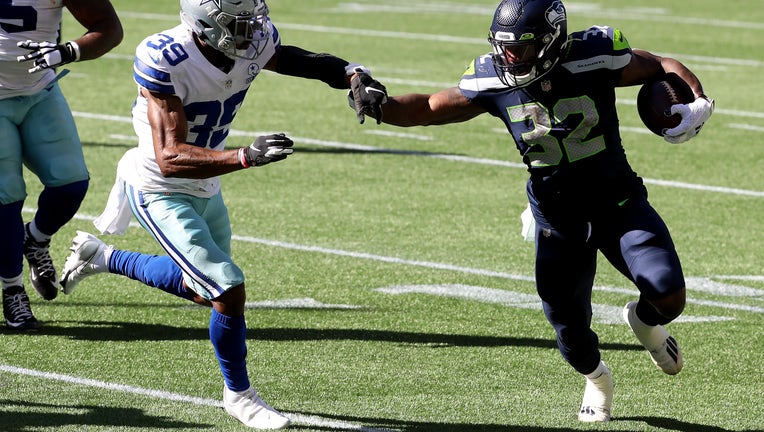 SEATTLE, WASHINGTON - SEPTEMBER 27: Chris Carson #32 of the Seattle Seahawks runs with the ball against Brandon Carr #39 of the Dallas Cowboys during the second quarter in the game at CenturyLink Field on September 27, 2020 in Seattle, Washington. (P

Speaking on his radio show on KIRO-AM on Monday, Carroll said all the injuries suffered against the Cowboys were relatively minor. Carroll said Carson, Adams, Lewis and rookie linebacker Jordyn Brooks underwent MRIs on Sunday night and had what he termed “first-degree” injuries.

Carroll was most upset about the injury to Carson, who was hurt on a tackle by Dallas defensive lineman Trysten Hill. Carson was already down, but Hill continued to roll Carson's legs and bent his knee awkwardly.

Carroll said they need to see how Carson responds to know if he'll be able to play Sunday at Miami.

Adams left the game in the fourth quarter with a groin strain and Carroll said it was “really bothering him.”

Lewis suffered a sprained ankle in the first quarter and Carroll said there was a chance he could return against the Dolphins. Brooks also suffered a knee sprain that ended his first NFL start early. The first-round pick played just 14 snaps.