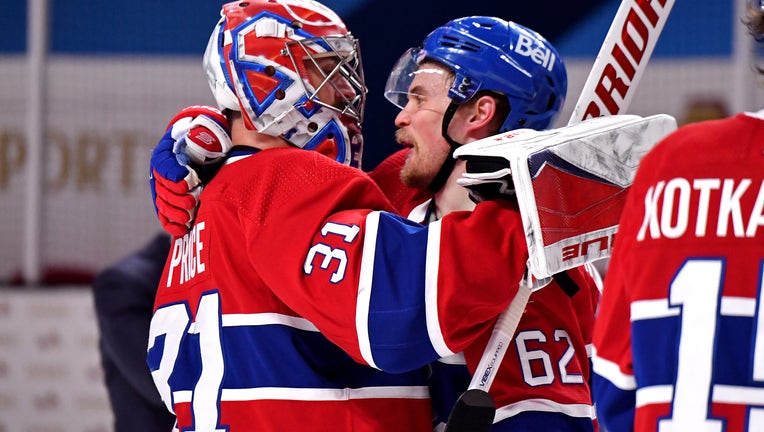 MONTREAL, QUEBEC - JUNE 24: Carey Price #31 and Artturi Lehkonen #62 of the Montreal Canadiens congratulate each other on the team's 3-2 overtime win against the Vegas Golden Knights in Game Six of the Stanley Cup Semifinals of the 2021 Stanley Cup P

MONTREAL (AP) - Artturi Lehkonen scored 1:39 into overtime, Carey Price stopped 37 shots and the Montreal Canadiens advanced to the Stanley Cup Final for the first time in 28 years following a 3-2 win over the Vegas Golden Knights on Thursday night.

Cole Caufield and captain Shea Weber also scored, and the Canadiens eliminated the Golden Knights in Game 6 of their semifinal series. Considered mere afterthoughts after entering the playoffs with the worst record, Montreal has won 11 of 13 since falling behind 3-1 to Toronto in its first-round series.

Montreal will make its playoff-leading 35th Stanley Cup Final appearance with a shot to add to its 24 championships. The Canadiens will face the winner of the semifinal series between the defending champion Lightning and New York Islanders. Game 7 is at Tampa Bay on Friday.

The Golden Knights, making their third semifinal appearance in four seasons of existence, fell short of returning to the championship round since their inaugural campaign in 2018, when they lost to Washington in five games. They were undone by a sputtering offense that managed just nine goals against Montreal following a 4-1 series-opening win, and an anemic power play that went 0-of-17 against the Canadiens.

The game was decided off a faceoff in the Montreal end, and after Price held his ground to stop former Canadiens captain Max Pacioretty set up in the left circle.

Montreal's Nick Suzuki gained the Vegas zone and slipped a pass to his left to Lehkonen, who lifted a shot beating Robin Lehner high on the short side.

The Golden Knights twice erased one-goal deficits. Reilly Smith scored 48 seconds after Weber opened the scoring. Alec Martinez tied it again 68 seconds into the third period by converting a rebound after Price was unable to glove Alex Pietrangelo’s shot from the top of the right circle.