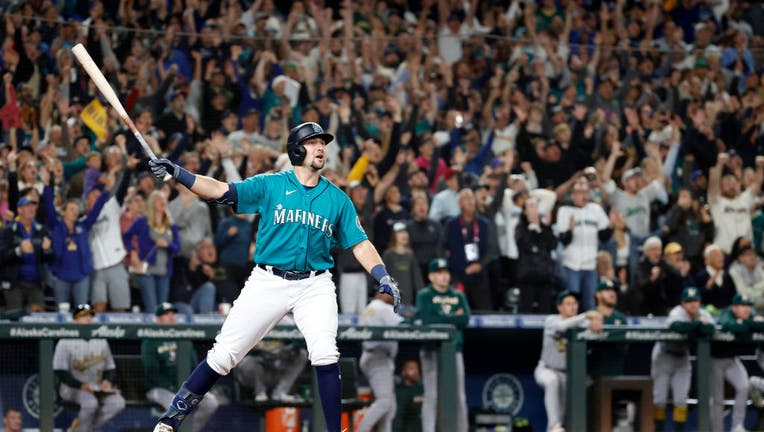 SEATTLE, WASHINGTON - SEPTEMBER 30: Cal Raleigh #29 of the Seattle Mariners celebrates his walk-off home run during the ninth inning against the Oakland Athletics at T-Mobile Park on September 30, 2022 in Seattle, Washington. With the win, the Seattl

SEATTLE - After the Seattle Mariners fell just short of snapping their playoff drought last year, outfielder Mitch Haniger penned a piece to fans in The Players' Tribune pledging that the end of the drought was coming soon.

"We lost when it mattered most. We fell short of our goal — period.

"And I need every Mariners fan to know that.

"But I also need them to know something else: This group is going to the playoffs. That’s not an if….. it’s a when. And that when is soon.

Haniger and the Mariners delivered on the promise in emphatic fashion on Friday night.

Cal Raleigh delivered a pinch-hit, walk-off home run off Oakland Athletics reliever Domingo Acevedo on a full count with two outs in the bottom of the ninth inning to lift the Mariners to a 2-1 victory on Friday night.

The win clinches the first playoff berth for the franchise in 21 years, snapping the longest playoff drought of any team in the "Big Four" North American sports.

So, Mitch, how does it feel?

"Pretty damn good," Haniger said from a ebullient Mariners clubhouse. "We did it. Like I said, this is the first box you got to check to get in the playoffs and then the ultimate goal is to win the World Series. But it feels pretty damn good to check that first box."

The Mariners had to do it themselves, too. A Baltimore Orioles loss to the New York Yankees earlier in the night also would have clinched a playoff spot for Seattle. Instead, the Orioles won 2-1 to force the Mariners to beat the A's to get the job done on Friday night.

It's just the way manager Scott Servais wanted it.

"I wanted it to end -- I didn't know we'd get a walk-off homer -- but I wanted to clinch it at home where it really mattered so our fans could enjoy it the way they have. I tip my hat to all the longtime Mariner fans throughout the Pacific Northwest that have hung in with us," Servais said on the field after addressing many of the 44,754 that were attendance for the victory.

The last time the Mariners were in the postseason on September 30th, 2001, Tom Brady was making the first start of his NFL career for the New England Patriots. The original iPod was still just under a month of way from being released as well.

In other words, it's been a while.

With the game tied 1-1 in the ninth, Raleigh entered as a pinch-hitter in place of Luis Torrens with two outs. Acevedo had struck out Mitch Haniger and Carlos Santana to put the game on the verge of extra innings. Raleigh had swung over a pair of sliders by Acevedo as the count worked full before launching another low slider deep to right field and off the Hit-It-Here Cafe windows above the right field seats.

Raleigh flipped his bat high in the air and the Mariners stormed the field in celebration as the drought officially came to a spectacular close. Raleigh grabbed his helmet in disbelief as he neared second base with his teammates waiting in celebration at home.

"I remember the moment when I knew it was fair and looking at the team and everybody's jumping. It was just crazy," Raleigh said.

"It was the craziest thing ever. I don't think I'll ever be able to forget that moment."

Logan Gilbert pitched a gem for Seattle on the mound. He allowed just one run on three hits with two walks and three strikeouts over a career-high eight innings of work for the Mariners. The lone run came on a solo home run from Shea Langeliers in the second inning.

Meanwhile, the Mariners couldn't solve Oakland starter Ken Waldichuk either. Waldichuk struck out eight over five innings for the A's. He allowed one run on three hits with Dylan Moore scoring on a Ty France double in the first inning.

J.P. Crawford and Eugenio Suárez each grounded into double plays in the fifth and eighth innings, respectively, as the Mariners offense couldn't cash in.

Matt Brash worked a clean inning in relief of Gilbert in the ninth inning to give the Mariners a chance to end it the bottom half of the inning. Raleigh's heroics then put an exclamation point on the death of the drought.

"When Cal stepped to the plate, I told myself 'it's over. He's going to end it,'" pitcher Robbie Ray said. "When he hit it I was just saying out loud 'stay fair, stay fair, stay fair!' Sure enough it was and man, it was just a really, really cool feeling."

Haniger, J.P. Crawford and Marco Gonzales are among the veteran Mariners that have taken ownership of wanting to be the group to finally end the drought. Haniger and Gonzales have been with Seattle since 2017. Crawford since 2019. They're some of the longest-tenured Mariners and they know the history behind the 20 seasons that fell short since the last team to make the playoffs.

"A lot of us just took ownership and said this is our streak to end, this is our drought to end and that's that's what we believed in all year," Gonzales said.

"The champagne, the beer never tasted so sweet. A lot of people worked really, really hard for this a long time. Even when the times were dark. We didn't see the light at the end of the tunnel. And a lot of people believed when they didn't have a reason to. And so this is for them."

The Mariners have not played in the postseason since their magical 116-win season in 2001 that remains tied with the 1906 Chicago Cubs for the most wins in MLB history. They felt short of the playoffs each of the next two seasons despite 93-win campaigns. An 88-win season in 2007 wasn't enough, nor was 89 wins in 2018 or 90 wins last season.

But with MLB expanding the postseason to six teams in each league this year, the Mariners finally had their postseason drought snapped after 21 years.

When Seattle first made their initial postseason appearance in 1995 as the "Refuse to Lose" Mariners overcame a 13-game deficit to the California Angels in early August, Dave Niehaus decried "19 long years of frustration is over" in his radio call of the one-game playoff victory that put Seattle is the postseason.

An even longer postseason drought has now come to a close and Seattle will be playing playoff baseball once again.

After the team emerged from the celebratory clubhouse back onto the field, Servais grabbed a microphone to address the crowd that remained in the building.

"Every day when the game starts, I look up at those banners," Servais said of the four banners that commemorate their few playoff appearances in the right field rafters. "We need to add another one. Yes, we’ve ended the drought. This team is just starting. We’ve got big games ahead of us and we’re going to need you with us. But for tonight, let’s party!"