STANFORD, Calif. (AP) — Bryce Love ran for 166 yards and three touchdowns against the nation's stingiest defense, leading Stanford to a 30-22 victory over No. 9 Washington on Friday night.

The Huskies (8-2, 6-2 Pac-12, No. 9 CFP) started fast with touchdown runs by Myles Gaskin on the first two drives but stalled after that in a crippling blow to their hopes of getting back to the four-team playoff.

The Cardinal (7-3, 6-2) bounced back from a loss at Washington State last week with a very balanced attack. K.J. Costello took advantage of opportunities downfield, completing 16 of 27 passes for a career-high 211 yards. Costello threw for just 105 yards in last week's loss. 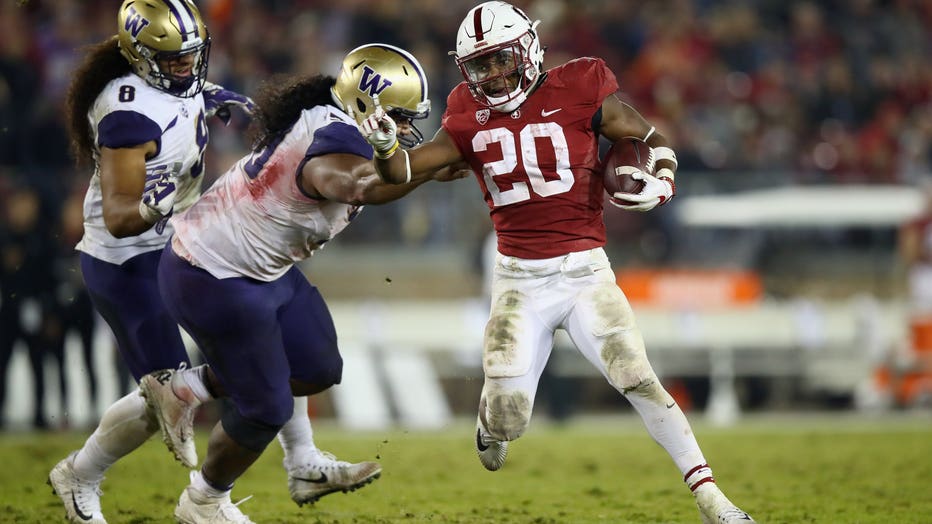 The result leaves Stanford and the Cougars in control of the Pac-12 North race. Washington State can clinch a spot in the conference title game with wins at Utah and Washington in the final two games. The Cardinal will go with a win next week against California and one loss by the Cougars.

Love also boosted his Heisman hopes after being held to 69 yards last week on a gimpy ankle that also forced him to miss one game. While he failed to extend his streak of games with a run of at least 50 yards to 11 games, he helped Stanford control the clock with a strong performance against a defense that came into the game ranked first in the nation in yards allowed and second in scoring defense. The Huskies had allowed only three TD runs all season before facing Love.

Washington: The Huskies used an up-tempo offense to drive 88 and 89 yards for touchdowns on their first two drives before getting stopped on a fourth-and-1 from the Stanford 19 on the third possession. Washington had only two first downs on the next five drives as the Cardinal adjusted and took control of the game. Gaskin, who ran for 120 yards, added his third TD with 4:22 left to tie Bishop Sankey's school record with 37 career touchdown runs.

Stanford: The Cardinal trusted Costello more this week and he delivered with a pair of 39-yard passes to JJ Arcega-Whiteside in the first half for the two longest offensive plays of the season against the Huskies. Those set up a 2-yard TD run by Love and one of Jet Toner's three field goals. Costello converted six third downs through the air on the night.

The Huskies will drop out of the top 10 next week while the Cardinal should get back into the poll.