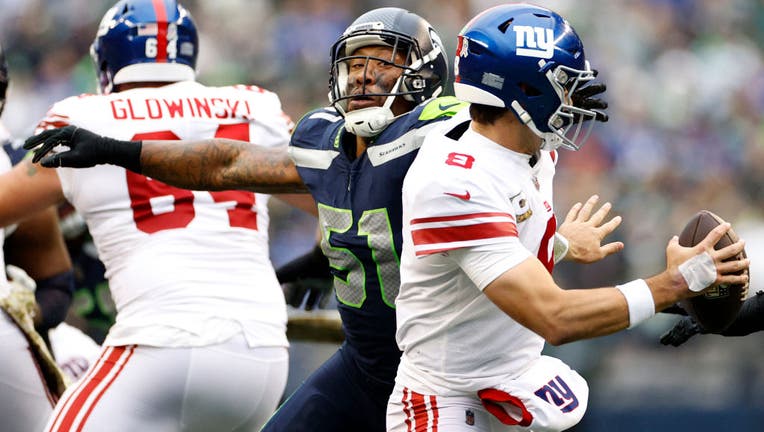 SEATTLE, WASHINGTON - OCTOBER 30: Bruce Irvin #51 of the Seattle Seahawks attempts to tackle Daniel Jones #8 of the New York Giants during the fourth quarter at Lumen Field on October 30, 2022 in Seattle, Washington. (Photo by Steph Chambers/Getty Im

RENTON, Wash. - The Seattle Seahawks have signed linebacker Bruce Irvin to their active roster after three weeks on the team's practice squad.

Irvin has played in the last two games for Seattle as a practice squad call-up and has easily shown that he can still play despite turning 35 years old earlier this week.

"It's been really fun just to see him get back into it. And he's done really well. So everything's positive," head coach Pete Carroll said. "I'm thrilled that we got a chance to sign him and get him on the roster and all of that."

Irvin has played just eight NFL games over the previous two seasons. He tore his ACL in Week 2 of the 2020 season with the Seahawks and needed two surgeries to repair all the damage in his knee. Last year, he played in six games with the Chicago Bears in a limited role.

Irvin fills the open roster spot for Seattle created by the release of cornerback Sidney Jones IV earlier this week. Irvin re-signed to the team's practice squad three weeks ago and took the first week to get back into the flow of football after not being in a training camp or playing for the first five weeks of the year.

"(If) I can come in Week 8 every year, I can do this about five more years," Irvin joked. "I felt good. … I was sore, of course, but nothing out of the normal."

Irvin said he's given up drinking any alcohol, which he believes helped him recover better after the first two games he's played back in Seattle.

"Monday I felt bad, but by Wednesday I was back," Irvin said.

Irvin started last Sunday's game against the New York Giants and played 52 total plays with 47 defensive snaps and five on special teams. While Irvin has just four tackles combined in his two games played back with Seattle, it was still clear he has the ability to impact the game positively for the Seahawks.

Against the Giants, Irvin nearly had a sack of Daniel Jones that ultimately led to a Cody Barton sack instead. He hip-checked Jones into Barkley to blow up a run in the backfield later in the game. His strong play on the edge of the defense throughout the game helped keep Saquon Barkley from running into the clear as well as Seattle held the Giants rusher to just 2.7 yards per carry.

"It’s a remarkable recovery at his age to look like he looks right now. He looks the same as he did, he doesn’t look any different," Carroll said.

"He comes back to us as a serious team member. He’s into it. He’s not just here for the fun and games, he’s here to play football, do something, win, and all of that."

Irvin said he feels some similarities between the current Seahawks team and the young group he was around early in his career that would win a Super Bowl and play in another as a part of the most successful stretch in team history.

"Since I've been here, it's just continuing to get better and better and better. It's impressive," Irvin said. "Because I was watching at the beginning of the year and it's like two different defenses. So my job is just to keep guys focused and let them know we ain't done nothing yet. It's Week 9 and we got a lot of football left if we want to get to where we want to be."

Irvin said he wanted another chance to play so he could end his career in a way he wanted to go out. And to do it in Seattle is the perfect place for him to do so.

"Just provided me an opportunity to continue to finish my career and finish it how I want to finish," Irvin said Friday. "The last couple of years ain't been how I wanted it to be. From injuries, to playing time, to not winning, I kind of didn't want to go out like that. Once it's over, it's over. You know, so I don't want to be five years from now thinking ‘dang I could have got two or three more years in.’ So that was my biggest thing.

"Here it was perfect. I don't think with my personality -- And you know, I'm not a bad person, but I'm very vocal. You know, I have a certain way about me. I’m kind of in my ways, not bad, but I don't want to go nowhere new to experience that. I might come off to other people as rude somewhere else where here it's just me being me. Just being real authentic. So I think this was one of the few places that I will only leave my house to come play again."

Wide receiver Marquise Goodwin and outside linebacker Darrell Taylor have both been ruled out for Sunday's game against the Arizona Cardinals due to groin injuries.

Taylor played just three snaps against the New York Giants last week as the injury he's managing kept him from being able to play.

"He's working out with (the trainers)," Carroll said. "He's totally in rehab."

Goodwin has clearly solidified himself as Seattle's third receiver in the offensive rotation. However, he came out of Sunday's game with a minor injury that lingered through the week.

"Marquise was starting to make some noise for us and he was getting going and we'll miss him. He's got some real traits and stuff that we like out there," Carroll said.

Dee Eskridge will bump up and get more chances with Goodwin unable to play on Sunday. Additionally, Penny Hart could factor in as well if he's able to play. Hart has missed the last three games with a hamstring strain and is questionable to suit up in Arizona.

Rookie Dareke Young could also get more offensive snaps as well if Hart can't go either.

"He's a really smart football player," Carroll said. "He's a really bright kid that really is impressive that way. He's been able to embrace all of the assignments and the rules and everything that we throw at him. He just needs to play some football and be out there. But special teams has been an area (he's showed up) and he's been physical when he does catch the ball and when he blocks and all that kind of stuff. It really shows up."

Safety Joey Blount (quadriceps) is the only other questionable player for Seattle.