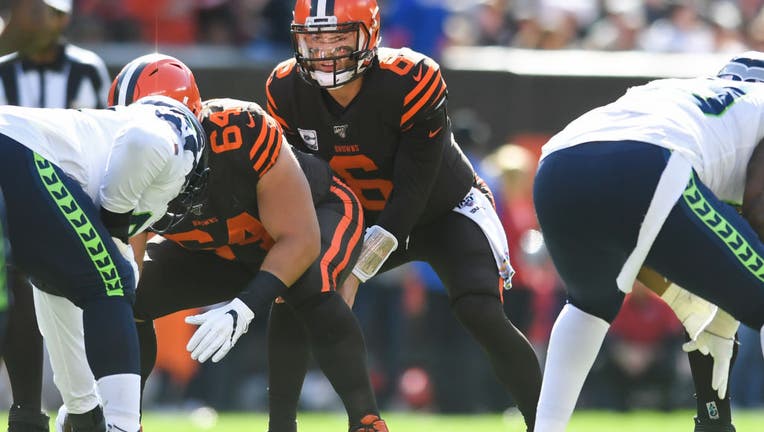 CLEVELAND, OH - OCTOBER 13, 2019: Quarterback Baker Mayfield #6 of the Cleveland Browns makes a call at the line of scrimmage in the second quarter of a game against the Seattle Seahawks on October 13, 2019 at FirstEnergy Stadium in Cleveland, Ohio.

Browns quarterback Baker Mayfield said in a podcast appearance that he believes the Seattle Seahawks are his most likely landing spot after his eventual departure from Cleveland.

On the Ya Never Know Podcast, Mayfield said he still doesn't have any real idea where he'll be playing next season. However, he said he believes Seattle is a likely landing spot.

"If this would have been about a week and a half ago I would have said Indianapolis," Mayfield said, referencing the Colts' trade to acquire Matt Ryan from the Atlanta Falcons. "Seattle would probably be the most likely option, but even then… I’m ready for the next chapter, the next opportunity."

Mayfield, 27, isn't expected to remain with the Browns after the team made a trade with the Houston Texans to acquire Deshaun Watson last month. Mayfield is set to enter the final year of his rookie contract with a fully guaranteed $18.858 million obligation this season, per OverTheCap.com.

The Browns have been trying to trade Mayfield. However, the contractual obligation for the season will be a significant deterrent. Only eight teams in the NFL currently have enough salary cap space to absorb Mayfield's contract, per the NFLPA's salary cap database. The Seahawks have only $16.4 million in space. While cap space can be created with relative ease in the NFL, the $18-plus million owed to Mayfield would be a sizable chunk to take on.

While the Seahawks could certainly still be looking for options at quarterback alongside Drew Lock and Jacob Eason, it seems unlikely a trade for Mayfield would make sense. Maybe it becomes more amenable if the Browns agree to pay a portion of Mayfield's salary or send along additional draft picks to incentivize a deal.

If Seattle selects a quarterback in the NFL Draft later this month, or re-signs Geno Smith, adding a player like Mayfield would appear rather redundant. If Mayfield was released by the Browns, then Seattle may be more interested in the possibility as they could sign him to a lesser contract that he is currently scheduled to make.

Mayfield knows he'll be in a position to have to prove himself again when he does find a new team.

"The only thing I’m guaranteed at the next stop is one year," Mayfield said. "I have one year wherever I go and it’s my next interview. It’s something to put on my resume for the next job whether it be I play that year wherever it’s gonna be and they extend me for longer, or if it’s that year and I got picked up somewhere else. I know I have this one year to do as much as I possibly can."

Mayfield led the Browns to an 11-5 record with 3,563 passing yards, 26 touchdowns and eight interceptions in 2020. They won their first playoff game since the franchise returned to Cleveland in 1999 before a loss in the Divisional Round to the Kansas City Chiefs.

Mayfield dislocated his non-throwing shoulder last year as he and the Browns struggled to match the previous year's success. Mayfield threw for 3,010 yards with 17 touchdowns and 13 interceptions while missing three games due to injury.