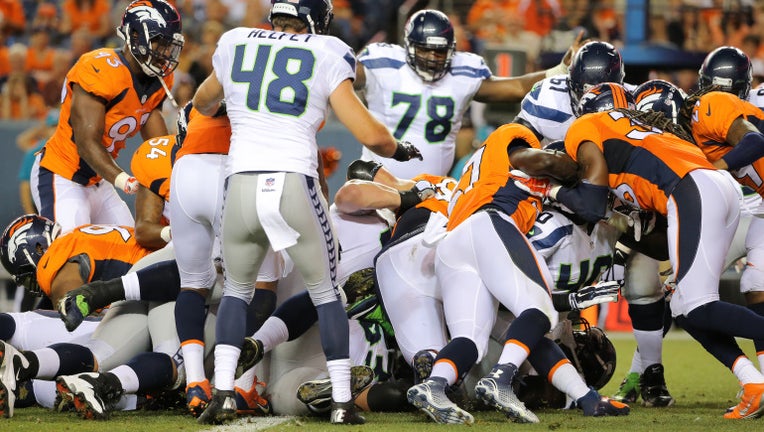 Running back Christine Michael #33 of the Seattle Seahawks is pushed over the line for a 1-yard touchdown against the Denver Broncos during preseason action at Sports Authority Field at Mile High on August 7, 2014 in Denver, Colorado. (Photo by Doug

It wasn’t exactly a Super Bowl rematch Thursday night. As expected, the majority of the game was played by guys fighting for a spot on the final 53-man roster.

Quarterbacks Russell Wilson and Peyton Manning only played a few drives each.

Perhaps one of the biggest stories of the night was the weather. The game was delayed for 46-minutes late in the 1st quarter because of a lightning strike in the Denver area.

Once the game got back underway, Wilson went on to complete 4/6 passes for 37 yards.

The Seahawks only touchdown came in the 2nd quarter when Christine Michael was pushed into the end zone from the one yard line.

On the other side, Peyton Manning completed 10/13 passes for 78 yards. After Manning came out of the game, Brock Osweiler went 6/12 for 85 yards.

The Hawks relied on field goals to keep them in the game. Steven Hauschka was 3/3 on field goal attempts -- 41 yards, 40 yards and 22 yards.

>> BLOG with stats, updates & commentary from the game: