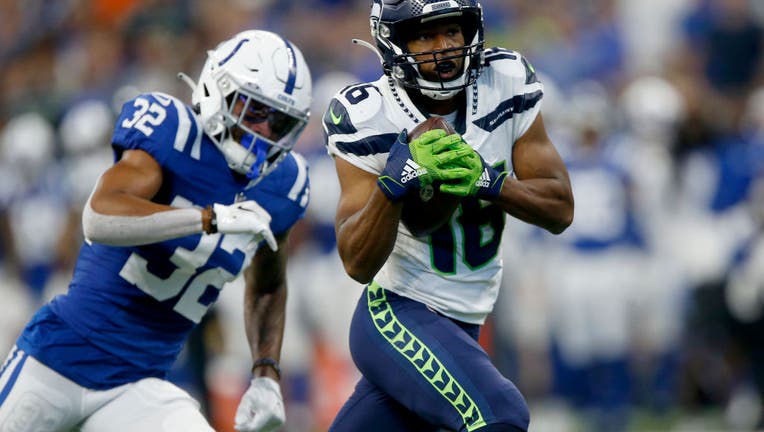 INDIANAPOLIS, IN - SEPTEMBER 12: Seattle Seahawks Wide Receiver Tyler Lockett (16) makes the catch and takes in in for the touchdown during an NFL game between the Seattle Seahawks and the Indianapolis Colts on September 12, 2021 at Lucas Oil Stadium

SEATTLE - The silence of last year’s NFL games had some benefits for those who’ve been trained to communicate in a cauldron of noise.

For example, Seattle Seahawks linebacker Bobby Wagner could hear his coaches yelling from the sideline.

Hearing his coaches, or his teammates, will become a thing of the past for Wagner when Seattle hosts Tennessee on Sunday, playing a regular-season home game in front of fans for the first time since Dec. 29, 2019.

Seattle was regarded as having arguably the best home-field advantage in football before the COVID-19 pandemic forced the Seahawks to play nine games — eight in the regular season and one playoff loss — with only cardboard cutouts in the seats last season.

Nearly 21 months after Seattle’s "12s" last got a chance to scream, yell and cause chaos in a meaningful game, they’ll be back.

"It was so uncomfortable last year to not share the experience with them because the game has always been that, where we do it all together," Seattle coach Pete Carroll said. "To know now that are fans get to come, take part in it, and be in this game with us is a big deal. It’s exciting."

Those fans will be welcoming a team that looked impressive in its opening win over Indianapolis. With unknowns about how Seattle’s new offensive system would operate, Russell Wilson went out and posted one of the best games of his career, throwing nearly as many touchdowns (four) as incompletions (five).

Wagner was the anchor of a defense that wasn’t spectacular, but also didn’t need any of the crazy blitzing from last year that left Seattle vulnerable at times. His biggest task this week may be relearning how to communicate with teammates when no one can hear what’s being said.

"There’s definitely a level of over-communication that has to happen too, just make sure everything is clear," Wagner said. "In the road games or games like last year, you can kind of get a confirmation because people can hear you, but in this game there might be a chance where somebody might not hear you. You can’t take any chances whether the person heard you or not."

The setting and situation couldn’t be much more challenging for the Titans after their lackluster opening loss to Arizona. Tennessee’s offensive line was dominated and its defense was torched by Kyler Murray.

Avoiding the first 0-2 start for Tennessee since 2012 will be a major task.

"I’m sure no one’s expecting us to win this game but us," Titans defensive lineman Jeffery Simmons said. "We have to control it. We have to get their fans out of it."

The Titans cannot afford to allow QB Ryan Tannehill to be pressured like he was in the opener. Tannehill was sacked six times, lost two fumbles and was intercepted once. Arizona linebacker Chandler Jones had five of those sacks, abusing three-time Pro Bowl left tackle Taylor Lewan. Tennessee gave up 25 sacks all of last season, and Tannehill hadn’t been sacked that much in a game since Dec. 1, 2019.

Both Derrick Henry and Chris Carson are massive pieces of how their offenses function. One looked far better in Week 1 than the other.

Carson rushed for 91 yards and averaged 5.7 yards per carry, and had another three catches for 26 yards.

Meanwhile, Henry managed 58 yards on 17 carries and had three receptions for 19 yards as Tennessee struggled offensively. Henry has been very good away from home in recent seasons. In his past 16 road games dating to 2019, Henry has rushed for 2,003 yards.

"He’s really unique. There have not been very many guys like him over the years because he’s really fast, a big strider, and runs through things," Carroll said.

The Titans saw firsthand the dangers of letting a quarterback run around until he can find a wide receiver open downfield. Murray looked like a jitterbug in the opener escaping pass rushers, and the Titans know Wilson is equally capable of doing just that. Simmons had one of Tennessee’s two sacks in the opener, and said they just have to "go get him."

"We can’t be scared, we can’t be timid in the way we rush," Simmons said. "We’ve just got to go and attack the line of scrimmage."

For his part, Wilson didn’t have to do very much running around last week. Seattle’s protection was good and Wilson was able to make smart throws mostly from the pocket or on designed rollouts.

With one more victory, Wilson will become the second quarterback to amass 100 regular-season wins in his first 10 seasons. Peyton Manning had 105 victories in his initial 10 years, meaning Wilson could have the mark to himself by the end of the season.