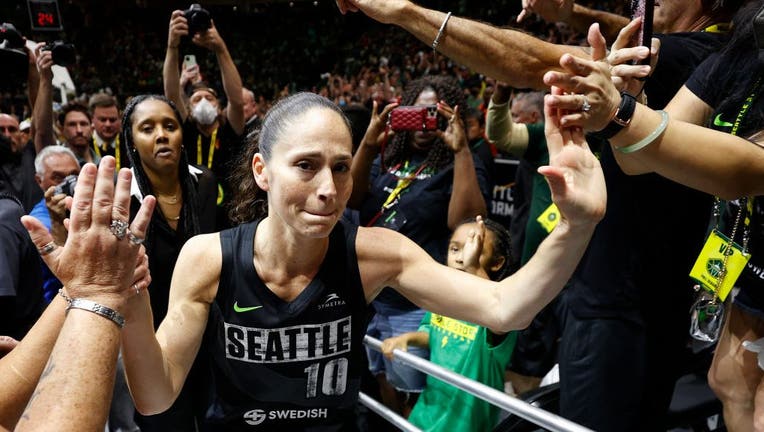 SEATTLE, WASHINGTON - SEPTEMBER 06: Sue Bird #10 of the Seattle Storm reacts after losing to the Las Vegas Aces 97-92 in her final game of her career during Game Four of the 2022 WNBA Playoffs semifinals at Climate Pledge Arena on September 06, 2022

SEATTLE - Breanna Stewart matched the WNBA playoff record of 42 points in Game 4 on Tuesday night, but it wasn't enough to overcome the firepower of Chelsea Gray and the Las Vegas Aces, who advanced to the WNBA Finals with a 97-92 victory over the Seattle Storm.

Stewart's 42-point effort was a Herculean attempt to stave off elimination and extend the legendary career of point guard Sue Bird to a Game 5 back in Las Vegas. Instead, the Aces showed why they were the best team in the WNBA this season in advancing to the championship round.

Stewart is just the fifth player in WNBA history to reach 40 points in a playoff game. She matched the 42 points scored by Angel McCoughtry of the Atlanta Dream in a 105-93 victory over the New York Liberty in 2010.

"I feel like we were in every single game," Stewart said. "I feel like at one point in every game we had an error and that led to multiple errors and they converted on it. I think that this series was incredibly tough for both sides and this isn't how we wanted to finish."

Jewell Loyd tied the game at 87-87 with 1:42 left to play. Gray then delivered another clutch 3-pointer to put the Aces back on top. After a Loyd miss, Gray converted another contested jumper to push the lead to five, 92-87.

Las Vegas kept making free throws down the stretch to hold on for the victory. The Aces will face the winners of Thursday's Game 5 between the Connecticut Sun and Chicago Sky in the WNBA Finals.

After falling into an early 6-0 hole, the Storm roared to life. A 12-1 run put Seattle on top as Stewart began to catch fire. She ripped off 13 straight points for the Storm with three of her five 3-pointers in the half fueling the surge as Seattle took a 20-11 lead.

Las Vegas clawed back before the end of the quarter with A'Ja Wilson getting her first basket of the night inside the final minute to trim the lead to 23-19 at the end of the frame.

Wilson and Gray combined for 63 points against Seattle in their 110-98 victory in Game 3. The Storm seemed to get a jump on the duo early as Wilson's two points in the first quarter in building their advantage.

Former University of Washington star Kelsey Plum carried the Aces offense in the early stages with 10 of Las Vegas' 14 first quarter points. But Gray and Wilson started to get rolling as the Storm offense stagnated. Gray and Wilson combined for 15 second quarter points to close the gap to 47-44 at the break.

"When Chelsea's rocking and rolling my biggest thing is just getting the hell out of her way," Wilson said.

Only Stewart and Loyd managed to score for Seattle in the third quarter as the Aces pulled out to a 66-59 lead.

"I don't think anyone on Planet Earth can guard her. I mean, she was unconscious," Storm head coach Noelle Quinn said of Gray.

Gabby Williams provided an offensive spark in the final quarter and a contested three-point play where Wilson raked her in the face gave Seattle an 83-82 lead, their first advantage since early in the half. Jackie Young, who added 16 points for the Aces, immediately answered with a three-point play of her own to play Las Vegas back on top.

"You kind of feel like the girl that beat Serena [Williams]. It's bittersweet," Aces head coach Becky Hammon said. "I know myself and our whole staff and team and organization have so much respect for Sue. She has a fairytale career, one that kids dream of. She got to live it, she lived it out loud and her thumbprint on the game is forever etched in.

"We're obviously thrilled to be going back to the Finals. I'm pumped for our girls, but it feels weird."

Loyd finished with 29 points in the effort for Seattle with Bird adding eight points and eight assists in her final game.

Every member of the Aces stayed on the court to give Bird hugs before exiting the court and she got a standing ovation from the crowd to chants of "Thank you Sue!" at Climate Pledge Arena.

"I did want to leave the court, it felt like that's where everybody was going so I just followed at first," Bird said. "But I also wanted to kind of have one last moment to say thank you, to soak it all in. Cause in some ways it is a happy thing. I'm proud of everything that we've accomplished here. And of course I'm sad, but there's happiness too to be able to have a moment like that with the fans, to have them chant the way they did. I know the tears don't look like happy tears, but there's a lot of happiness."

"I think you need to beat the best in order to be the best," Wilson said. "… They gave us everything that they had."