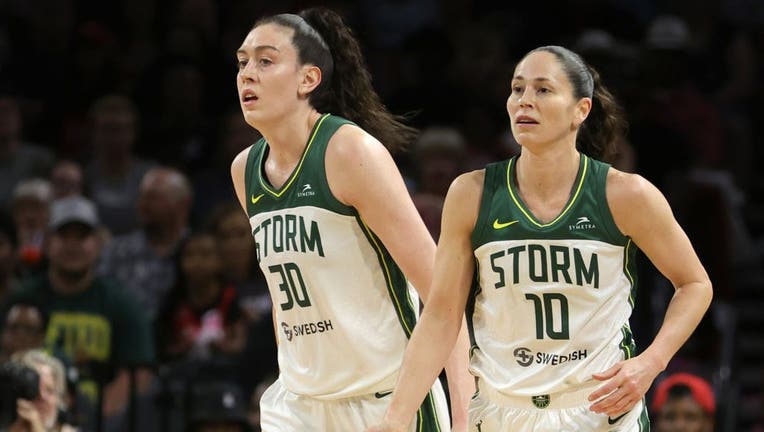 LAS VEGAS, NEVADA - MAY 08: Breanna Stewart #30 and Sue Bird #10 of the Seattle Storm walk off the court during a timeout in their game against the Las Vegas Aces at Michelob ULTRA Arena on May 08, 2022 in Las Vegas, Nevada. The Aces defeated the Sto

Seattle Storm standouts Breanna Stewart and Sue Bird have been named as starters for the WNBA All-Star Game set for July 10 at Wintrust Arena in Chicago.

For Bird, it will be her 13th appearance in the All-Star game and 11th start, both of which are league records. Stewart is making her fourth appearance and third start.

Stewart will serve as one of two captains for the game alongside Las Vegas Aces forward A'ja Wilson. Wilson and Stewart received the most votes in fan balloting.

Bird and Minnesota Lynx venter Sylvia Fowles will serve as co-captains. Stewart and Fowles will select one team with Wilson and Bird managing the other. Both Bird and Fowles are retiring after the end of the season.

Stewart leads the WNBA with 21.8 points per game and 2.1 steals per game. Bird is third in the league in assists at 6.2 per game.

"For icons like Sylvia and Sue to be voted into the AT&T WNBA All-Star Game as starters in their 19th and 15th seasons, respectively, is extraordinary," WNBA commissioner Cathy Engelbert said in a statement. "And when you see the starting lineups dotted with first-time All-Stars like Sabrina Ionescu, Kelsey Plum, and Jackie Young, it just seems right that Sylvia and Sue – who have said this will be their final season – join A’ja and Breanna as co-captains for an All-Star event that will in some ways symbolize the passing of the torch to a new generation of WNBA stars."

WNBA head coaches will vote for the rest of the roster, which includes three guards, five forwards and four players at either position regardless of conference.

The teams will be selected in a broadcast on ESPN on July 2.

Phoenix Mercury center Brittney Griner, who has appeared in seven prior All-Star games, was named an honorary All-Star and starter. Griner has been detained in Russia since February after being stopped at the airport with vape cartridges containing traces of cannabis oil allegedly found in her luggage.