SEATTLE - The Seattle Storm are healthy to begin the season with Breanna Stewart and Sue Bird back in the lineup and sit atop the preseason Associated Press WNBA poll.

The Storm were the unanimous choice receiving all 16 first-place votes from the national media panel Tuesday. It’s the first time that Seattle was No. 1 in the preseason since the AP has been doing the poll.

“I’m not surprised, I say that because we have a full roster,” Bird said in a phone interview. “That gives us an advantage. We have a lot of people returning and a lot of players got valuable experience last year when Stewie and I were out.”

Bird was quick to point out that as great as it is to be No. 1 in the preseason, the team still has to prove it’s the best on the court.

“You have to go out there and play the games,” said Bird, who missed last season while recovering from knee surgery. “That’s what I love about the WNBA. You see nightly what you’re made of as a player and as a team. The team that plays the best is the team that’s going to win. It doesn’t matter what’s on paper.”

Stewart, who missed 2019 while recovering from an Achilles’ tendon tear, was selected by the panel as the AP preseason player of the year. Brittney Griner and A’ja Wilson also received votes.

“It’s an honor. I think it’s people recognizing the fact that even though I was out and was out with a very serious injury, I still was able to put in the work I put in to get back to this point,” said Stewart. “I’m still on the younger end of my career and have the ability to bounce back from something like that.” 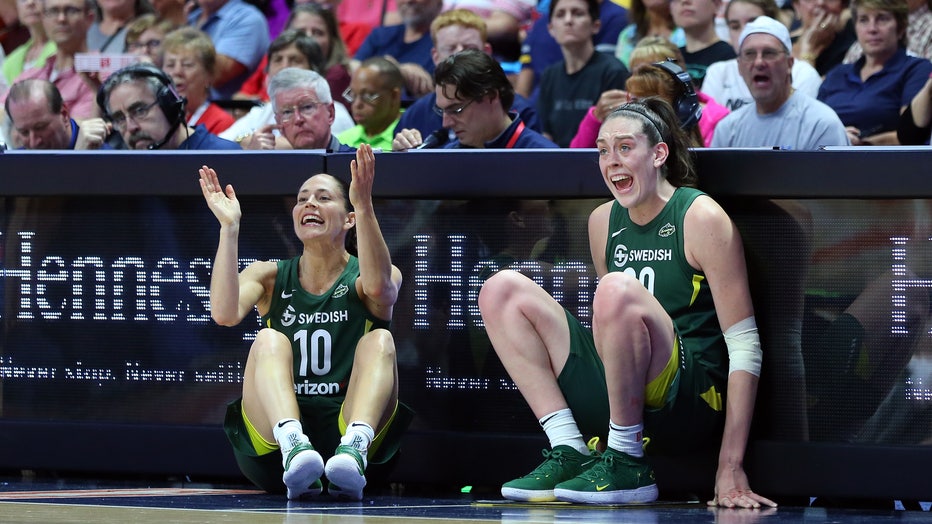 UNCASVILLE, CT - JULY 20: Seattle Storm guard Sue Bird (10) and Seattle Storm forward Breanna Stewart (30) cheer on their team as they wait to enter the game during a WNBA game between Seattle Storm and Connecticut Sun on July 20, 2018, at Mohegan Su

Los Angeles was picked second by the panel. The Sparks are led by Candace Parker, Nneka Ogwumike and Chelsea Gray. They lost in the semifinals of the WNBA playoffs last season to Connecticut.

Phoenix is behind the Sparks and the Mercury have high expectations for the year with the addition of Skylar Diggins-Smith to the roster as well as a healthy Diana Taurasi, who missed most of last season with back and hamstring injuries.

Las Vegas and Chicago are fourth and fifth in the poll. The Aces lost in the semifinals to eventual champion Washington while the Sky were knocked out by Las Vegas on a near-half court shot by Dearica Hamby.

Connecticut and Washington, who met for the WNBA title last year, were sixth and seventh in the poll. Both are missing key players from their playoff run last season.

Sun star Jonquel Jones opted out for the season because of the coronavirus pandemic. Washington is missing four of its five starters from last season as Natasha Cloud and LaToya Sanders are sitting out. Kristi Toliver was signed by Los Angeles in the offseason, although she’s sitting out as well.

Elena Delle Donne, the reigning MVP, was denied by the league’s independent panel of doctors to be medically excused because of her battle with Lyme disease. She hasn’t decided if she’ll join the Mystics in Florida at the WNBA bubble after she’s finished rehabbing her back. Delle Donne suffered three herniated disks in the playoffs last year.

Minnesota, Indiana, Dallas, Atlanta and New York round out the poll. The Liberty are led by No. 1 pick Sabrina Ionescu, who was selected by the panel as the preseason rookie of the year.