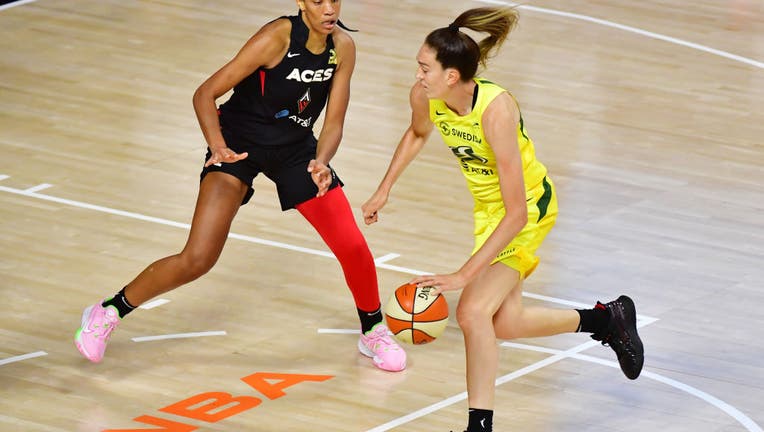 PALMETTO, FLORIDA - OCTOBER 02: Breanna Stewart #30 of the Seattle Storm drives to the basket against A'ja Wilson #22 of the Las Vegas Aces during the first half of Game 1 of the WNBA Finals at Feld Entertainment Center on October 02, 2020 in Palmett

SEATTLE - Breanna Stewart is always looking for ways to improve her game and this season her efforts culminated in a couple more career milestones.

The Seattle Storm forward led the WNBA in scoring for the first time in her career, averaging 21.8 points, and Tuesday she became the first player to repeat as The Associated Press WNBA Player of the Year.

Stewart received six votes for AP Player of the Year by the 10-member media panel narrowly edging A’ja Wilson, who received the other four votes. Stewart is the first two-time winner of the award since the AP voting began in 2016.

"It’s an honor to be recognized as the best in the league," said Stewart, who was also named player of the year in 2018. "Since I started in the WNBA in 2016, just trying to get better. Elevate myself and the team, the league as a whole. A big honor, but we’re motivated by more and that’s trying to win a championship."

Stewart’s fourth-seeded Seattle Storm begin their playoff run on Thursday in a best-of-three series against Washington.

The WNBA will announce its league awards over the course of the postseason, which begins Wednesday.

Wilson was selected as the AP’s Defensive Player of the Year, edging Alyssa Thomas and Natasha Cloud. Wilson anchored the Aces’ defense averaging 1.9 blocks and 1.4 steals a game.

Her Aces teammate Jackie Young was chosen as the most improved player.

Tanisha Wright became the first former WNBA player to win the AP Coach of the Year award. She was one of six former players to be head coaches in the league this season — five of them led their teams to the playoffs.

"It’s good practice to have former players on the bench whether they are head coaches or assistant coaches," Wright said. "We’ve come up through the fire and put our stamp on the WNBA. I’m proud to be part of that group of players that have played in this league and impacted it in a different way now."

"Rhy put us on her back and made a statement for herself and the organization and franchise," Wright said. "Carry that load and do it with the grace and poise she did it with, I’m super proud of her and her accomplishments."

Las Vegas finished the year atop the power poll. Chicago, Connecticut and Seattle followed the Aces. Washington was fifth with Dallas, New York and Phoenix rounding out the top eight. Minnesota, Atlanta, Los Angeles and Indiana finished off the poll.

Wilson of Las Vegas earned the final AP Player of the Week honors after averaging 20.3 points, 10 rebounds and 3.3 assists to help the Aces go 3-0 and clinch the top seed in the playoffs. Other players receiving votes included Ionescu of New York, Stewart of Seattle and Chelsea Gray of the Aces.