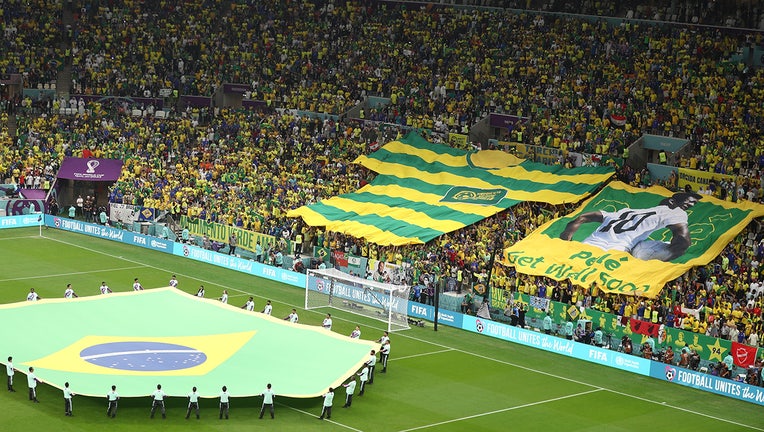 LUSAIL, Qatar - Brazilian fans showed their support for soccer great Pelé ahead of the national team's match against Cameroon at the World Cup on Friday.

The 82-year-old Pelé, who had a colon tumor removed last year, was hospitalized Tuesday in Sao Paulo to regulate his medication.

"It's sad to hear this news about Pelé on the day of a Brazil match at the World Cup," said 41-year-old Brazil fan Rafael Bistelli, who traveled from Sao Paulo to watch the national team in Qatar. "We are trying to send him our positive energy from here."

Fans displayed a banner with the image of Pelé holding a soccer ball behind one of the goals at Lusail Stadium. A large image of the Brazil great could be seen on a building near the venue, along with the messages "get well soon" and "we love Pelé."

"Friends, I am at the hospital making my monthly visit," Pelé wrote on Instagram on Thursday. "It’s always nice to receive positive messages like this. Thanks to Qatar for this tribute, and to everyone who sends me good vibes!"

Brazilian fans who gathered before the match against Cameroon also had Pelé in mind, singing songs about him and sending him well-wishes.

In the pre-match news conference on Thursday, Brazil coach Tite said the entire team wanted "to wish good health to Pelé" from Qatar.

On Wednesday, doctors said Pelé was in stable condition after arriving "for a reevaluation of the chemotherapeutic treatment of the tumor." They said Pelé was not in intensive care.

RELATED: US star Christian Pulisic cleared to play against Netherlands in World Cup

Brazil faced Cameroon in its last group game. The team has already qualified for the round of 16 after wins against Serbia and Switzerland.