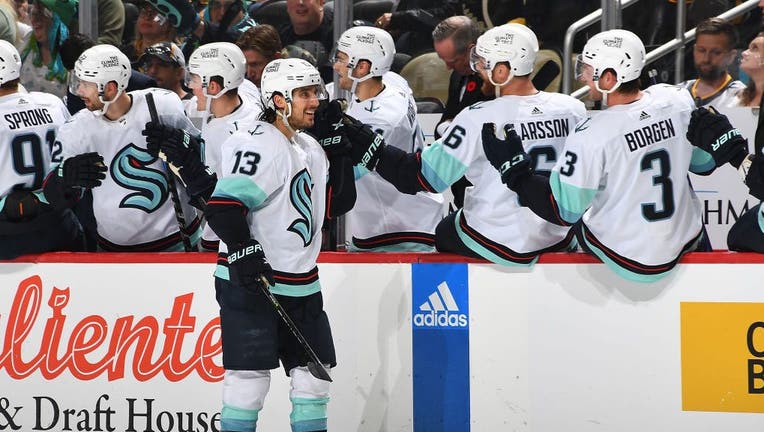 PITTSBURGH, PA - NOVEMBER 05: Brandon Tanev #13 of the Seattle Kraken celebrates his third period goal against the Pittsburgh Penguins during the game at PPG PAINTS Arena on November 5, 2022 in Pittsburgh, Pennsylvania. (Photo by Joe Sargent/NHLI via

PITTSBURGH - Brandon Tanev scored the game-winning goal with 3:39 remaining and the Seattle Kraken beat Pittsburgh 3-2 on Saturday night, sending the Penguins to their seventh straight loss.

Tanev took a pass from Yanni Gourde and beat goaltender Tristan Jarry from point-blank range to snap a 2-all tie. It was Tanev’s first goal of the season and it came against the team he played for from 2019-21.

The Kraken won their fourth straight, the longest streak for the second-year franchise. Seattle has five wins in its last six games, including a sweep of its three-game road trip.

"Great for me, but I think it’s more important that the team got all six points on this road trip," Tanev said. "That’s the mindset and the goal we had setting out to this road trip and the three games we played. We beat three good teams. That’s the idea."

Vince Dunn and Gourde also had goals for the Kraken. Martin Jones stopped 36 shots after shutting out Minnesota in Seattle’s previous game.

"This group, they’re a pretty tight group," Kraken coach Dave Hakstol said. "That’s always a great place to start. Tonight, third game in a road trip, there were pieces here that weren’t all that pretty. But there was never a point in the hockey game where you felt our group was rattled."

The Penguins got goals from Sidney Crosby and Jake Guentzel. Crosby also had his 900th career assist.

The Penguins tied it 2-all when Guentzel’s pass went off the stick of Seattle’s Matty Beniers and into the net with 10:09 remaining.

That came just under two minutes after Gourde scored when Tanev kicked the puck to him after having a pass from Morgan Geekie bounce off his knee.

"In the third period, I thought we had some momentum, so it’s discouraging from that end of it," Pittsburgh coach Mike Sullivan said.

However, Sullivan said his team needs to keep from getting frustrated as the losses pile up.

"The solution is just making sure we stay in the moment, and we don’t get overwhelmed by all the noise around (the losing streak)," Sullivan said. "We just have to focus on the process and that’s what we’re trying to do.

"When we don’t live up to the expectations we have for each other and don’t get the results we want … these guys take it to heart. We’ve got to dig in a little more, be more determined, be more vigilant in more critical moments of the game."

Crosby opened the scoring at 5:24 of the second period by converting a one-timer off a pass from Kris Letang.

Dunn tied it a little less than 2 1/2 minutes later on a slap shot off a faceoff.

NOTES: Six of the Kraken’s seven wins this season are against teams that made the playoffs last year. … The Penguins’ losing streak follows a 4-0-1 start to the season. … Geekie’s three-game goal streak ended. … Kraken center Jared McCann (lower body) missed his second consecutive game. … Penguins winger Josh Archibald was sidelined by an undisclosed injury and centers Jeff Carter and Teddy Blueger sat out with lower-body injuries. Guentzel played after missing practice Friday because of illness.