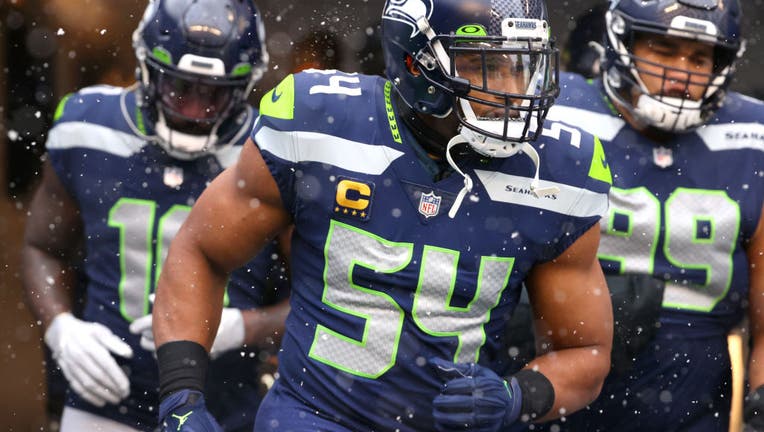 SEATTLE, WASHINGTON - DECEMBER 26: Bobby Wagner #54 of the Seattle Seahawks takes the field before the game against the Chicago Bears at Lumen Field on December 26, 2021 in Seattle, Washington. (Photo by Abbie Parr/Getty Images)

SEATTLE - The Seattle Seahawks will be without middle linebacker Bobby Wagner when they face Arizona in the regular season finale Sunday.

Wagner was ruled out Friday due to a sprained knee suffered last week against Detroit. Wagner was injured on the first defensive play of the game for Seattle, but said earlier this week that he was hoping to get back in time to play against the Cardinals.

Coach Pete Carroll said Wagner still had swelling in the knee and wasn’t able to practice this week. Cody Barton is expected to start in Wagner’s place.

"He really has great awareness of whether he could or not," Carroll said. "If it was possible, he would be ready to go for it but it just isn’t going to make it. We’re really listening to him a lot on this one."

Wagner had started 62 straight games and has missed only two regular season games since the start of the 2015 season, starting all 110 games played during that time. Wagner missed five games during the 2014 season due to a toe injury but has played at least 14 games in every other season of his career.

Wagner entered this week second in the league in tackles with a career-high 170. There’s a chance he could be passed for the team lead by Jordyn Brooks, who ranks third in the NFL with 165. Wagner also had one sack and one interception this season.