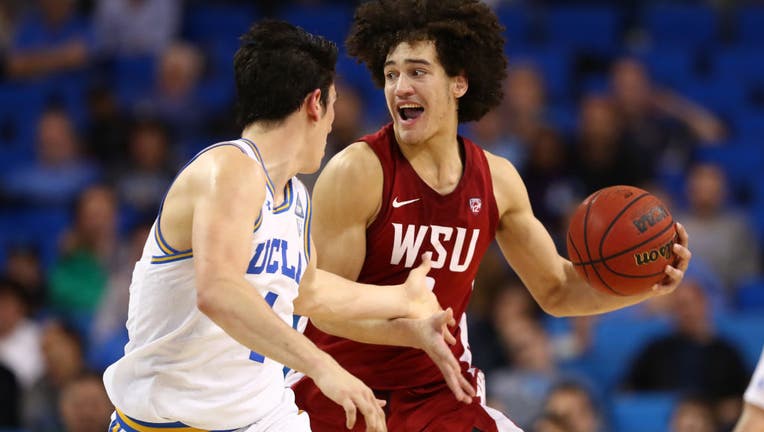 LOS ANGELES, CALIFORNIA - FEBRUARY 13: CJ Elleby #2 of the Washington State Cougars tries to maneuver around Jaime Jaquez Jr. #4 of the UCLA Bruins in the second half at Pauley Pavilion on February 13, 2020 in Los Angeles, California. (Photo by Joe S

SEATTLE - The Trail Blazers selected forward CJ Elleby out of Washington State with the 46th pick in the NBA draft on Wednesday.

Elleby, at 6-foot-6 and 200 pounds, played two seasons for the Cougars, averaging 16.6 points and 7.5 rebounds a game. A lefty known for his defense, Elleby matched his career-high with 30 points in his final game with Washington State, an 82-68 victory over Colorado in the opening round of the Pac-12 tournament. He added 10 assists.

His 30 points were the most for a Cougar in the conference tournament since Klay Thompson had 43 points in a game in 2011.

Earlier in the draft, the Blazers selected Isaiah Stewart out of Washington with the 16th pick, but the 6-foot-9, 250-pound forward won’t be heading to Portland.

The Trail Blazers reportedly traded the pick to Houston along with forward Trevor Ariza on Monday for veteran Robert Covington, according to a report by ESPN. The deal could not be formally announced by the Blazers until after the draft.

A person with knowledge of the deal told The Associated Press that the Rockets then agreed to trade Ariza and the 16th pick to the Detroit Pistons for a future first-round pick. The person spoke on condition of anonymity because the trade had not been announced. Detroit already had the seventh pick in this year’s draft.

Covington, who averaged 12.4 points and 6.6 rebounds, will be a key addition for Portland, which finished the coronavirus-shortened regular season 35-39.

Among the teams invited to play in the bubble in Florida, the Trail Blazers made it to the NBA playoffs for the seventh straight season but they were knocked out in the first round by the top-seeded Los Angeles Lakers in five games.