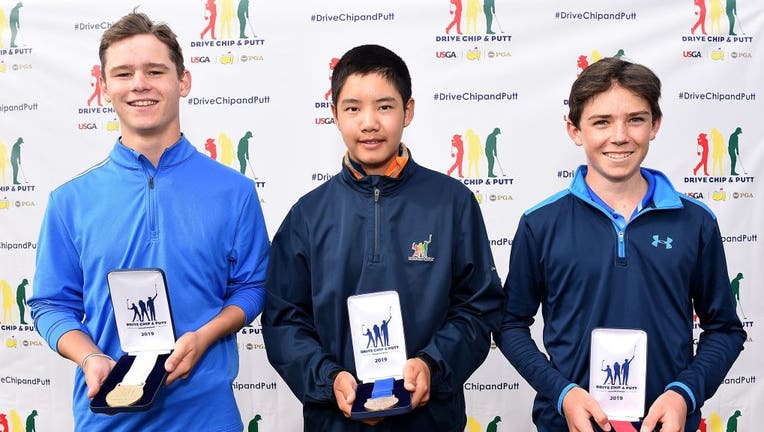 UNIVERSITY PLACE, WASHINGTON - SEPTEMBER 08: (L-R) Max Herendeen, Howard Shu and Stewart Walker pose with their medals after winning the Boys 14-15 category during the regional qualifier of the Drive, Chip and Putt Tournament at Chambers Bay on Septe

Max Herendeen, who is entering his senior year at Bishop Blanchet this fall, won the Boys Junior PGA Championship on Friday with a five shot win at Cog Hill Golf and Country Club in Lemont, Ill.

Herendeen, a Bellevue native that is committed to play at the University of Illinois, posted a 16-under par total to earn a five shot victory over Ethan Gao of Alpharetta, Ga.

"It was definitely a ball-striking week," Herendeen said, via the PGA of America. "I didn’t putt as well as I probably could have. I struck the ball well. I left a lot of shots out there with the putter. I just knew if I kept giving myself opportunities, I’d have good chances. Mentally I got myself around the course really well, played to the smart side of the holes, really eliminated the big numbers. That was my goal for the week, no doubles and we got through the week with no doubles."

The championship was contested over four rounds at the Dubsdread and Ravines courses at Cog Hill. Dubsdread was the long-time host of the Western Open and BMW Championship on the PGA Tour. It also hosted the 1997 U.S. Amateur, which was won by Matt Kuchar.

Herendeen opened the championship with a 4-under par 68 on the Dubsdread course to put him in third place after day one. A 6-under par 66 on the Ravines course vaulted him into a tie at the top of the leaderboard at 10-under with Nicholas Gross of Downingtown, Pa. A third round 2-under 70 on Dubsdread moved him to 12-under par and into a three-shot lead over Gao and seven clear of Gross.

In the final round, Herendeen was 5-under through his first 11 holes to help put the title out of reach for the chasing pack. Even with a bogey on the 18th, Herendeen cruised to a five-shot win.

Herendeen nearly qualified for the U.S. Open earlier this summer. He was leading the 36-hole qualifier at Pronghorn Resort in Bend, Ore. for much of the day before a late stumble dropped him from qualifying position. He finished at 4-under, two shots out of a playoff for the final qualifying spot.

Kaitlyn Schroeder of Jacksonville, Fla. won the girls championship with a two-shot victory over Rianne Mikhaela Malixi of the Philippines.