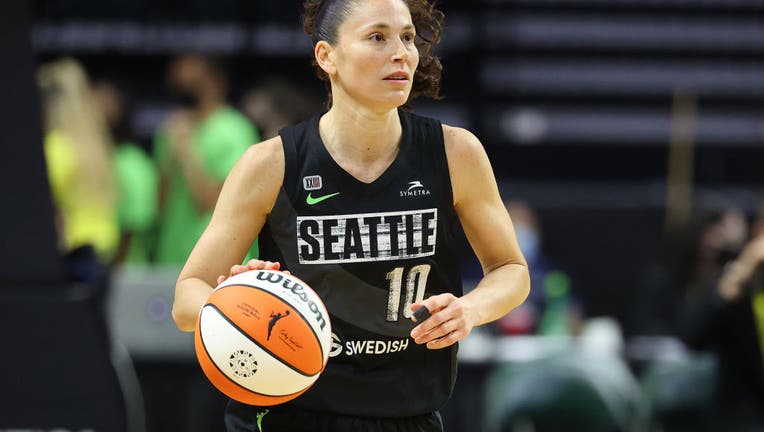 EVERETT, WASHINGTON - MAY 15: Sue Bird #10 of the Seattle Storm dribbles down the court during the fourth quarter against the Las Vegas Aces at Angel of the Winds Arena on May 15, 2021 in Everett, Washington. NOTE TO USER: User expressly acknowledges

Breanna Stewart had 17 points and 12 rebounds and Stephanie Talbot added 11 points for Seattle (4-1).

Bird, who threw away the ball at the end of regulation, sandwiched a pair of 3-pointers around a layup by Loyd in an 8-0 run to open the extra period and the Storm led the rest of the way. Jasmine Thomas converted a three-point play to trim the Sun’s deficit to 87-84 with 2:58 to play but Stewart answered with a 3-pointer — her first basket since the first quarter — and Seattle held on.

DiJonai Carrington made a reverse layup for the Sun — the last WNBA team to lose this season — with 15.3 seconds left in regulation to force OT.

Connecticut was without coach Curt Miller, who was fined $10,000 and suspended for one game by the WNBA for making a disparaging remark to a referee Sunday about the weight of Las Vegas Aces post player Liz Cambage.

It was the first time since 2014 that Seattle had played back-to-back overtime games. Seattle beat Dallas in OT in its previous contest.