SEATTLE - My oh my! Friday's Seattle Mariners game against the Los Angeles Angels is officially sold out as the M's remain in the playoff hunt.

According to the team, there were only a few thousand tickets left for Saturday's and Sunday's games. Full capacity at T-Mobile Park is 47,000. 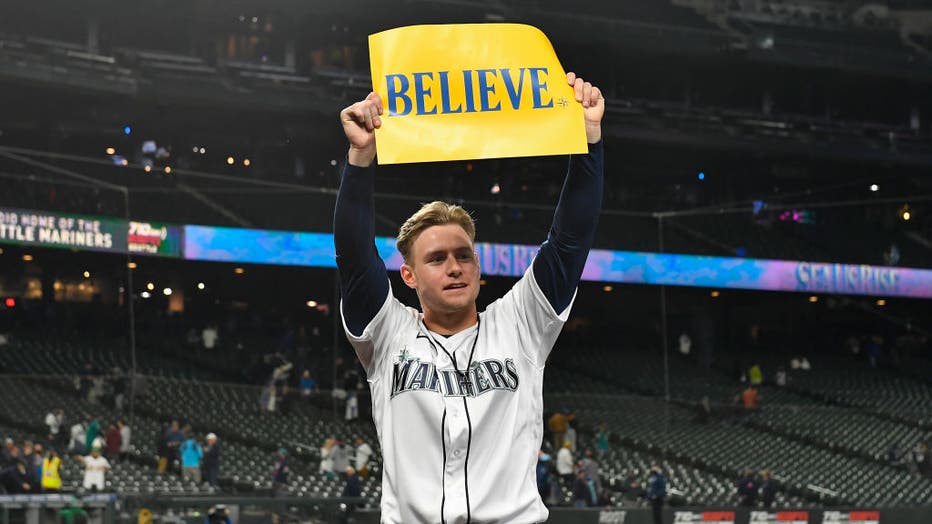 SEATTLE, WASHINGTON - SEPTEMBER 29: Jarred Kelenic #10 of the Seattle Mariners holds up a "Believe" sign after the game against the Oakland Athletics at T-Mobile Park on September 29, 2021 in Seattle, Washington. The Mariners won 4-2. (Photo by Alika

The Mariners won for the 10th time in 11 games beating the Oakland Athletics 4-2 on Wednesday night, keeping the pressure on their fellow competitors for the two wild-card spots in the AL.

Seattle stayed a half-game behind Boston for the second wild-card slot and is 1½ games behind New York for the top spot, trying to end a 20-year drought since last reaching the postseason.

The Mariners have an off-day on Thursday before starting their final series of the regular season at home against the Los Angeles Angles.

"Believe" has become Seattle’s rallying call, and the Mariners are charging into the final weekend of the regular season with plenty of belief and right in the thick of the AL wild-card race.

"This is fun. This is the way it’s baseball supposed to be at this time of year and we still got a lot of big, big games ahead of us," Seattle manager Scott Servais said.

Seattle opens its final series on Friday night against the Angels.

The Mariners had several reminders for fans ahead of this weekend's packed games: