Bald Eagle Golf Club at Point Roberts is back open after having to close for two years due to the Canadian border closure amid the COVID-19 pandemic.

POINT ROBERTS, Wash. - While the golf industry thrived during the last two years amidst the COVID-19 pandemic, one golf course in Washington had to sit on the sidelines hoping to just survive.

Bald Eagle Golf Club in Point Roberts had to shut its doors, lay off workers, and hope the course could tread water until a general state of normality was able to return. That’s because Point Roberts found itself totally isolated due to the community’s unique geographical circumstances.

Dubbed "America's loneliest golf course" last year by Golf.com, Point Roberts is surrounded by the Strait of Georgia on three sides with the Canadian border to the north. When the border between the United States and Canada was determined to be the 49th parallel, this sliver of land remained U.S. territory despite being disconnected from the rest of Washington state.

With the border closed for much of the last two years to non-essential travel – and a local population of less than 1,200 per the 2020 U.S. Census – the club had no choice but to close and ride out the pandemic.

But after more than two years, the course finally reopened to the public on June 15, 2022.

"We had people that had specifically booked to be here on opening day in support of us," assistant general manager Dee Gough said.

"’So excited. We can't wait to come back.’ It was really nice to see and to read it off. We had very, very kind words."

But getting to reopening was quite the task.

The course had to lay off all of its staff except for superintendent Rick Hoole. It then fell upon Hoole to find a way to sustain the course as best he could without a maintenance staff or much of a budget at his disposal.

Initially believing the shut downs would be short-lived, Hoole and his staff continued to maintain the course as normal through the early stages of the pandemic in 2020. But when it became clear the COVID-19 problem wasn’t going away, Hoole had to lay off his staff and take on the challenge himself. Local volunteers pitched in to form a makeshift staff to aid Hoole in cutting grass. It no longer became a priority to keep the course mowed to playing standards. Instead, the fairways, tees and rough were all cut at the same height of two inches to reduce equipment usage and ease the task for the volunteer force.

"I didn't have much of a budget," Hoole said. "They wanted me to spend as little as possible. So I was trying to use up some old fertilizer and stuff, which some [of it] wasn't good for the grass. But you know, you live and learn. It was very heartbreaking."

General manager Tracy Evans stayed to help on a volunteer basis as she focused on her job as a realtor during the closure. Evans made sure payroll was met for Hoole and that bills were paid. Continued investment into the course from owner Xiao Dan "Coco" Luo was critical in keeping the course afloat. Evans also said they received a $39,000 grant from the Department of Commerce as one of several distributions made to the Point Roberts community to help its residents survive.

Evans said they didn’t get clearance to move forward with reopening until April 11th. It then became a two-month sprint to try and get the course back in shape to open and staff in place to begin serving customers again.

"We lost a lot of staff during the pandemic," Evans said. "Employees that moved away back south, lower 48 [states]. Rick had to put a crew together for maintenance and then it was a matter of getting supplies and we had the supply chain issues."

The course remains understandably rough around the edges. Five holes – the 2nd, 3rd, 4th, 9th and 16th – were playing to temporary greens when the course reopened. Three weeks later, only the 4th and 16th remain as temporary greens. Some bunkers still had patches of grass in need of removal and irrigation lines across the course continue to have issues. The greens that are open for play run slower than normal as the grass returns to full health. But despite a spring that was cold and wet, the fairways played dry and firm.

"A few people are commenting on the fact that we have temporary greens and we're not ready," Gough said. "But also our prices reflect that. We're not gouging anybody. We're kind of going with this seasonal seniors rate ($40) for our green fees, and we're not raising the prices on the weekends right now. You know, it's just one flat fee. And it reflects the fact that we've been closed for over two years, but we get so many people that are saying to us, we're so happy you’re open, staff are great, the attitude is perfect, you know, and they're just happy to be back." 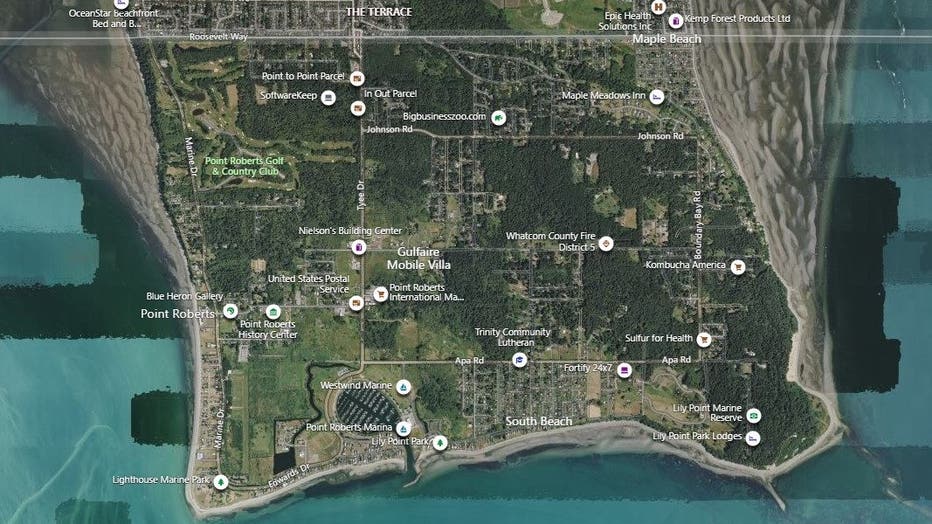 Bald Eagle Golf Club is a 6,868-yard, par 72 design from Canadian architect Wayne Carelton. The course was named as the eighth-best new course in the United States by Golf Digest Magazine in 2003.

The layout has an interesting mix of holes that cut through the trees and butts right up against the Canadian border. It’s possible – though challenging – to slice a drive into Canada off the tee box on the par-5 fifth hole. All that’s separating the fairway from its neighboring country is some trees and Roosevelt Way.

"Every hole is on its own pretty well," Hoole said. "No homes. No noise. It's pretty quiet. You don't have any highways or planes. You don't have to look out for the other golfer. You lose your balls a lot if you can't hit straight. That's the challenge of it."

Staffing has remained a difficulty. Workers need to be U.S. citizens and there is a limited pool of candidates to draw from within the tiny exclave of Point Roberts. Canadian residents are off-limits unless they have dual-citizenship. The clubhouse restaurant still isn’t back to full capacity. It’s serving as just a snack shack and operating on reduced hours due to staffing shortfalls.

"Every local business is hiring and we have a very, very limited labor pool in Point Roberts. We can't hire Canadians unless they're dual citizens. So hence our hours right now or kind of reduced," Evans said. "We're going to extend our hours in July and August, but we'll just see what we can do. You know, try to make it as enjoyable for our clients and customers as we possibly can."

Additionally, those that do come to visit the course by crossing the border still have to deal with challenges attached to that. To enter Canada, travelers must complete a survey on the ArriveCAN app that includes their travel authorization (passport, enhanced driver’s license, etc.) and COVID-19 vaccination status. If you’re driving through from mainland Washington, this means completing the survey twice, when coming through the border in Blaine and again when leaving Point Roberts. For travelers that may not be smartphone-inclined, that’s another hurdle to clear for entry.

"There's a lot of people with expired passports and Nexus cards also. So once those offices get caught up on all of those applications, I think that will make a large difference in all border communities," Gough said.

But even with those challenges, the reopening has been met with excitement. Gough said that when they sent out notifications that the course was set to reopen, she got a barrage of emails by the following morning expressing excitement and support.

Evans said they have received calls from people in Abbotsford and Chilliwack in British Columbia, and as far away as Alberta asking if they’re back open as they seek places to play. While there are some hoops still to jump through for the time being, Bald Eagle Golf Club has survived a challenge unlike any other golf club in the United States and is back open for play.

"I’m just so, so happy that the owners decided to reopen and get it going because it really is a crucial part of our community," Evans said. "It’s one of the biggest chunks of land, you can hear the birds… We are just thrilled."