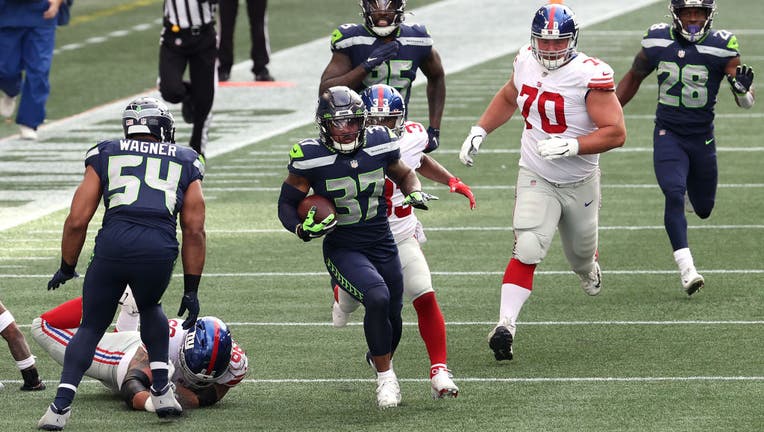 SEATTLE, WASHINGTON - DECEMBER 06: Quandre Diggs #37 of the Seattle Seahawks runs with the ball after his interception against the New York Giants during the first quarter in the game at Lumen Field on December 06, 2020 in Seattle, Washington. (Photo

SEATTLE - Laughed at and mocked for being on top of the worst division in the NFL, the New York Giants now have an impressive win to validate their spot as NFC East leaders.

Alfred Morris scored a pair of third-quarter touchdowns, the New York defense shut down Russell Wilson and one of the top offenses in the league, and the Giants stunned the Seattle Seahawks 17-12 on Sunday.

Double-digit underdogs, the Giants (5-7) handed Seattle its first home loss of the season, sent the NFC West race into some mayhem, and kept their spot on top of the NFC East for another week.

Following its 0-5 start, New York has won five of its past seven, the last four in a row. New York had been close in tight losses to Tampa Bay and the Rams, but picked the perfect time to get its first victory over a team with a winning record.

And the Giants did it with starting quarterback Daniel Jones (hamstring) a spectator after getting hurt last week against Cincinnati. Colt McCoy was far from spectacular but made key plays and avoided critical mistakes following a first-half interception.

Meanwhile, alarms will be going off all over Seattle (8-4) after a sloppy, uninspired performance. Seattle’s offense that was once unstoppable couldn’t get started until it was too late. Wilson was 27 of 42 for 263 yards and was often hesitant with his decisions.

He was sacked five times, a number of those simply from holding the ball too long. The biggest sack came in the closing seconds when Leonard Williams threw Wilson for an 8-yard loss on third down. A fourth-and-18 desperation throw by Wilson was batted down, and the Giants were left to celebrate.

Seattle seemed poised for another of its late rallies after Wilson hit Chris Carson on a 28-yard TD pass with 6:09 left to pull within 17-12, a drive kept alive by a key third-and-long defensive holding penalty on New York.

But McCoy made two big throws on the Giants’ ensuing drive, converting a third-down with a pass to Evan Engram and hitting Darius Slayton for 14 yards into Seattle territory. New York eventually punted, but the Giants’ defense came through.

The Giants topped 100 yards rushing for the seventh straight game and Gallman reached the century mark for the first time in his career. It was Gallman’s 60-yard sprint on a second-and-7 early in the second half that changed the momentum. Gallman escaped through a crowd for the long run that set up Morris’ 4-yard TD and an 8-5 Giants lead.

After Seattle failed to convert fourth-and-1 at its 48, the Giants needed five plays to take a 14-5 lead on Morris’ 6-yard catch from McCoy.

The Giants pushed the lead to 17-5 on Graham Gano’s 48-yard field goal after rookie Darnay Holmes’ first career interception — a pass that should have been caught by Chris Carson.

Not surprisingly, Seattle was involved in a game that had a strange score at some point. The 5-0 halftime score was the first in an NFL game since Week 2 of the 2013 season when the Seahawks led the 49ers 5-0 at the half.