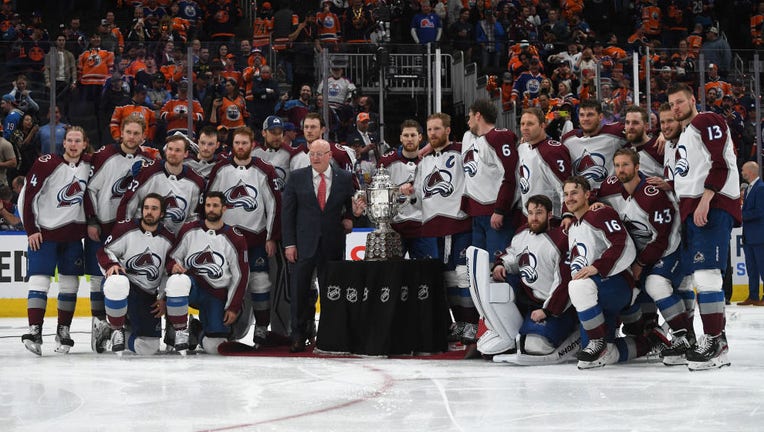 The Colorado Avalanche pose with the Clarence S. Campbell Bowl after defeating the Edmonton Oilers in Game Four of the Western Conference Final of the 2022 Stanley Cup Playoffs on June 06, 2022, in Edmonton, Alberta. ( Derek Leung/Getty Images)

EDMONTON, Alberta - Artturi Lehkonen is sending a team to the Stanley Cup Final for the second straight season.

Lehkonen scored 1:19 into overtime, and Colorado rallied to beat the Edmonton Oilers 6-5 Monday night, completing a four-game sweep in the Western Conference final and propelling the Avalanche into the Stanley Cup Final for the first time since 2001.

Colorado will take on the winner of the Eastern Conference final between the New York Rangers and two-time defending Stanley Cup champion Tampa Bay Lightning. The Rangers lead that best-of-seven series 2-1. Game 4 is Tuesday at Tampa Bay.

Lehkonen repeated his feat of last season, when he scored in OT in Game 6 to send the Montreal Canadiens to the final against eventual repeat champion Tampa Bay.

"Cale (Makar) took the shot," Lehkonen said. "I got a tip on it. It landed straight on my blade. I basically had an empty netter in front of me, so tap it in."

Lehkonen becomes the second player in NHL history, and first in 83 years, to score an overtime goal to send his club into the championship series more than once in his career. Toronto’s Gordie Drillon accomplished the feat in 1938-39.

"Everybody knows how good he is, how resilient he is," Mikko Rantanen said of fellow Finn Lehkonen, acquired by Colorado at the trade deadline. "He checks, he defends hard, he kills penalties, plays on the power play, he scores big goals, goes to the hard areas. What else can you ask for from a player — a trade acquisition. It’s fun to watch, and I’m really happy that we got him, and he’s shown why we gave quite a bit for him."

"Our main thing is just trying to be resilient, making sure that every single night we bring that same game," Makar said. "Sometimes it might not be pretty, but at the end of the day we’re just going to try to get the job done."

"I don’t think anyone necessarily expected us to be here," Draisaitl said. "With that being said, we expected to be here, we want to be here and we want to be even further. I’m proud of the group, but obviously we're disappointed."

McDavid sees the Oilers' playoff run as move in the right direction.

"It feels like it's steps," McDavid said. " Every team goes through it. You become a playoff team, then you get there most years and they go on a little bit of a run. They learn that lesson and then it's their time to win. You look at a Colorado team that has been in that situation many, many times and obviously they are knocking on the door right now. This is a step in the right direction."

The teams combined for six goals in the third period — four by Colorado, which rallied from a 4-2 deficit despite being outshot 15-13.

"It was a great comeback win, for sure," Lehkonen said. "We were talking in the second intermission that we just got to find our game and we can pull through this."

Rantanen appeared to complete Colorado's comeback, scoring a power-play goal with just over five minutes remaining to give the Avalanche a 5-4 edge.

But the Oilers stormed back and forced overtime when Kassian scored at 16:38 and tied it at 5-all. Lehkonen scored 1:19 into overtime, a goal that stood up after review for a high stick.

The Avalanche improved to 11-2 in the playoffs, including a perfect 7-0 on the road. Only six other teams in NHL history have strung together at least seven consecutive road victories in a post-season.

"I’ve waited a long time to have an opportunity to have a chance to play for a Cup," veteran defenseman Erik Johnson said. "I saw the puck in, I was just so happy that it went in and we advanced and now we get a chance to go for the Cup."

Colorado opened the scoring at 3:46 on a power play when Lehkonen stole the puck from Hyman and fed Makar before firing a shot through traffic and in off Smith’s left post for his fifth goal of the playoffs.

Trailing 1-0 after the first period, the Oilers got going at 7:39 of the second when Hyman took a pass from Draisaitl off the rush and beat Francouz with a backhand past the glove for his 10th goal of the playoffs.

Nugent-Hopkins gave Edmonton its first lead at 16:57 when Toews and MacKinnon got their signals crossed. The Oilers center jumped on the turnover and beat Francouz on another backhand move — this time to the blocker side — with his sixth as Draisaitl, playing with an injured leg, was getting treatment after hobbling to the bench.

Colorado rookie Alex Newhook was whistled for delay of game for shooting the puck over the glass late in the period, and Edmonton made the visitors pay when McDavid scored his 10th goal of the postseason, and 31st point, beating Francouz off another Draisaitl feed for a 3-1 lead with 1:06 left in the period.

McDavid and Draisaitl are the eighth pair of teammates in NHL history to each record 30 points in a playoff.

Colorado got one back 31 seconds into the third when Toews’ shot hit Oilers defenseman Cody Ceci in front as he was battling with MacKinnon. It was Toews' fifth.

Hyman scored his second of the night and 11th overall on a 4-on-2 rush, sending a knuckling shot off a Draisaitl set-up past Francouz at 3:55 for a 4-2 lead.

Landeskog got Colorado back within one at 8:58 on a mad scramble in front after Smith turned the puck over.

Edmonton got a power play with under nine minutes to go looking to go back up by two, but Draisaitl’s shot off the side of Francouz’s goal was as close as the Oilers would get.

MacKinnon tied it with his 11th on a high shot Smith with 6:30 left in regulation, setting the stage for Rantanen’s go-ahead goal, his fifth of the playoffs.

But Kassian scored his second, firing home a puck in the crease after Draisaitl’s initial shot with 3:22 left.

Colorado got past the Oilers in four straight despite losing No. 1 goalie Darcy Kuemper and winger Andre Burakovsky to injury in Game 1, before Kadri went down Saturday. Kuemper returned to serve as the Francouz’s backup Monday.

"We’re playing hockey on June 6th. In order to accomplish that, you’ve done some good things and I don’t think we can lose sight of that, but there’s a lot more required in order to find a way to get the Stanley Cup Final," Edmonton coach Jay Woodcroft said.

NOTES: The Colorado Avalanche were without the injured Nazem Kadri. Kadri was hurt on an illegal hit by Edmonton's Evander Kane in Game 3. Kadri didn’t return after Kane sent him crashing left arm-first into the boards 1:06 in, a hit that was reviewed and called a major penalty. Kane was suspended for Game 4 by the NHL.

The Avalanche have not revealed what Kadri’s injury is or announced how long he’d be out. ... The Oilers were also minus second-line winger Kailer Yamamoto for a third straight contest after he took a hit from Gabriel Landeskog in Game 2. ... The Oilers were looking to become just the fifth team in league history to win a series after falling behind 3-0.