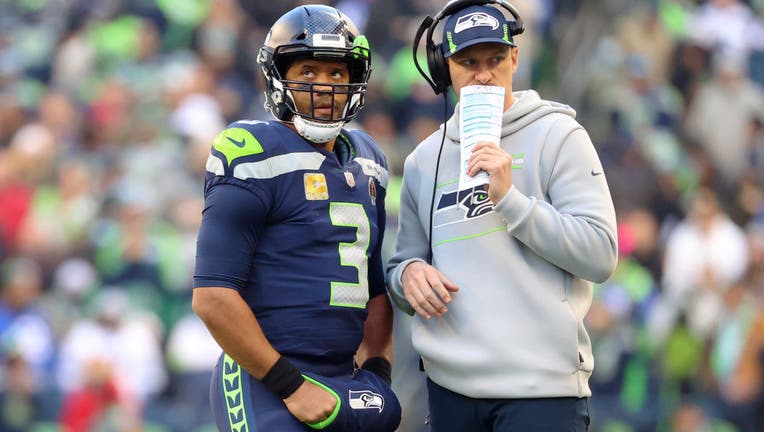 SEATTLE, WASHINGTON - NOVEMBER 21: Russell Wilson #3 of the Seattle Seahawks and quarterbacks Coach Austin Davis discuss play against the Arizona Cardinals during the third quarter at Lumen Field on November 21, 2021 in Seattle, Washington. (Photo by

Coach Bryan Harsin announced Saturday the hiring of Davis to run the offense and coach quarterbacks. Harsin fired Mike Bobo from those positions following a 6-6 record in their first regular season at Auburn. The team faces Houston in the Birmingham Bowl on Dec. 28.

Davis played in the NFL for St. Louis, Cleveland, Denver, Seattle and Tennessee. He started in coaching as an offensive assistant with the Seahawks in February 2019 and was elevated to quarterbacks coach in 2020, working with eight-time Pro Bowler Russell Wilson.

"From the first conversation I had with Austin, you could just feel his passion for coaching and teaching the game," Harsin said in a statement. Davis is a former Southern Miss walk-on quarterback who entered the NFL as an undrafted free agent. He played in 16 career games and started 10, all but two in the 2014 season with the St. Louis Rams.

"Being born and raised in Mississippi, you know very well what SEC football is all about and I couldn’t be more excited about the opportunity that is before me," he said.

The Pac-12 is tapping into former football stars such as Brock Huard, Toby Gerhart and Lincoln Kennedy as it explores ways to boosts the conference’s fortunes on the field and off.

Seahawks coach Pete Carroll called Davis "one of the bright young minds in the game."

"He’s been able to transition from player to coach unlike anybody I’ve ever seen," Carroll said. "It was just so smooth for him, and he’s been thinking like a coach for a long time, obviously because he was able to capture the role.

Wilson called Davis "an amazing teacher" and praised his passion for and understanding of the game, saying he’s "going to be a brilliant offensive coordinator and potential head coach one day."

The NFL gave the Seahawks the green light to expand marketing to grow their Canadian fanbase.