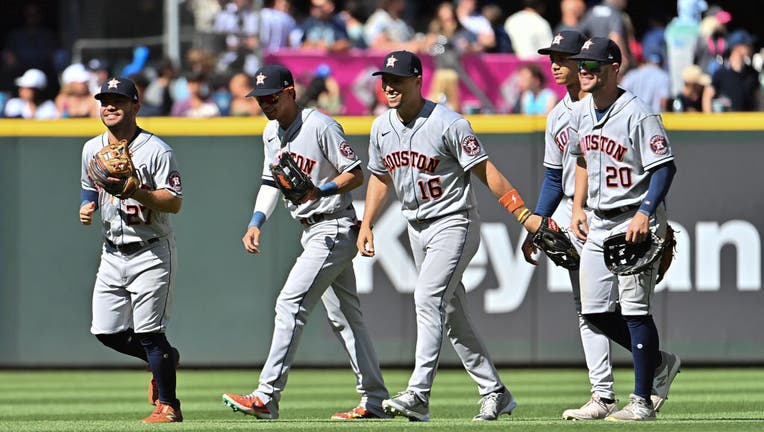 SEATTLE - Jose Altuve and Jeremy Peña hit back-to-back home runs off Robbie Ray to begin the game, and the Houston Astros roughed up the reigning AL Cy Young Award winner in an 8-5 victory over the Seattle Mariners that completed a three-game sweep Sunday.

Martín Maldonado had three RBIs from the No. 9 spot in the lineup and All-Star lefty Framber Valdez (9-4) took a shutout into the seventh inning for the Astros, who won their fifth straight and increased their AL West lead to 13 games over second-place Seattle.

The Mariners had won 14 in a row before Houston arrived, but were stopped cold by the defending AL champions coming out of the All-Star break.

"We played good ball," Houston manager Dusty Baker said. "We held on a couple games, but our bullpen came through. Guys were operating on fumes, but they found some energy to win the game."

Ray (8-7) was tagged for six runs and 10 hits in three innings. Altuve sent the first pitch of the game into the left-field bleachers, Peña followed with his 14th homer and the Astros were off and running.

It was Altuve’s 30th career leadoff homer. He leads the majors with eight this season.

"I think (Peña’s) homer was even better," Altuve said. "Because that really set the tone for the other hitters."

Houston scored three more times on five consecutive hits to start the second, making it 5-0. In the third, Yuli Gurriel scored on a fielder’s choice.

Meanwhile, the Mariners couldn’t get much going against Valdez until the seventh, when Sam Haggerty hit a two-run triple with two outs. J.P. Crawford drove in Haggerty with a double, and Valdez was replaced by Seth Martinez. He struck out Ty France to end the inning.

Maldonado blooped a bases-loaded single into left field to score Alex Bregman and Aledmys Diaz in the eighth.

Abraham Toro hit a two-run homer for Seattle in the bottom half.

Houston closer Ryan Pressly returned from the paternity list and threw a perfect ninth inning for his 20th save. Pressly has retired 30 consecutive batters dating to June 25, setting a club record.

"It sounds good, but you’re not really thinking about any of that when you’re out there," Pressly said. "You’re just trying to get three outs and do it anyway you can."

It was the second time this season the Astros swept the Mariners. The teams play a four-game series next weekend in Houston.

"We got beat," Seattle manager Scott Servais said. "They executed, they made pitches, they made plays, they got timely hits, and that is why they swept the series."

Astros: All-Star DH Yordan Alvarez is nursing a sore right hand and was out of the starting lineup.

Mariners: Rookie OF Julio Rodríguez is still day to day with left wrist soreness. Rodriguez had an MRI on Saturday that revealed no damage other than bruising. ... OF Jesse Winker left in the fifth with a right ankle sprain, which came after he collided with Peña near first base in the second inning. Winker hopes to play Monday against Texas.

Mariners: RHP Chris Flexen (6-8, 3.79) goes Monday against Texas. Flexen has allowed no more than one earned run in each of his last three starts.