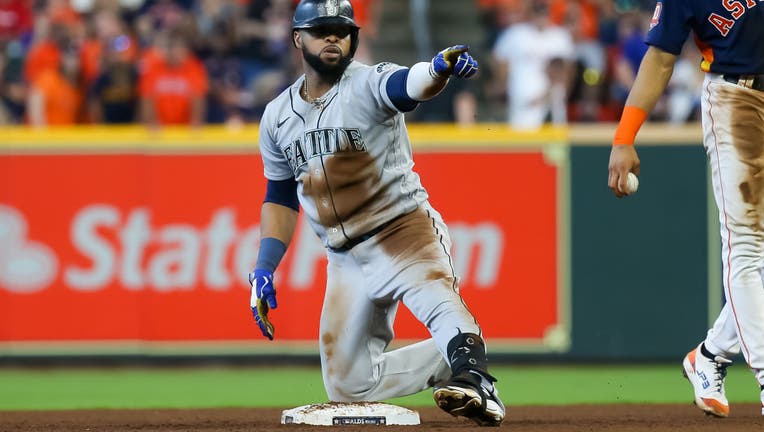 HOUSTON, TX - OCTOBER 13: Seattle Mariners designated hitter Carlos Santana (41) points to the visitors dugout after getting safely on second base in the top of the sixth inning during the MLB ALDS Game 2 between the Seattle Mariners and Houston Astr

SEATTLE - The Seattle Mariners and the Houston Astros play in Game 3 of the ALDS. The Astros hold a 2-0 lead in the series and can advance to the ALCS with a single win.

Saturday’s game is the 22nd meeting between these teams this season. The Astros are up 14-7 in the season series.

Julio Rodriguez has 24 doubles, three triples and 28 home runs for the Mariners. Adam Frazier is 11-for-34 with two doubles over the past 10 games.

Yordan Alvarez has 29 doubles, two triples and 37 home runs for the Astros. Jeremy Pena is 13-for-36 with a double, a triple, three home runs and eight RBI over the last 10 games.

Nicky Scarlotta, the die-hard Yankees fan whose "Marinahzz" video went viral, is in Seattle for the playoff games, and he stopped by FOX 13 Seattle to talk about the Mariners.