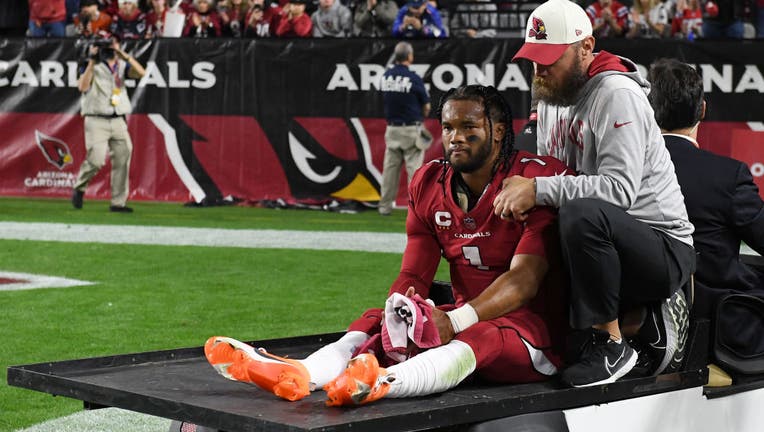 Kyler Murray #1 of the Arizona Cardinals is carted off the field after being injured against the New England Patriots during the first quarter of the game at State Farm Stadium on December 12, 2022 in Glendale, Arizona. (Photo by Norm Hall/Getty Imag

GLENDALE, Ariz. - Arizona Cardinals quarterback Kyler Murray has a torn ACL and will miss the remainder of the season.

Cardinals coach Kliff Kingsbury confirmed the extent of the injury during his Tuesday news conference.

The news is not a surprise after the 25-year-old injured his knee on the third play of Monday night’s 27-13 loss to the New England Patriots.

The fourth-year quarterback was flushed out of the pocket and running to his right when he tried to juke past a Patriots defender, but tumbled to the grass in obvious pain.

Players from both teams surrounded the quarterback before he was carted off the field with a towel draped over his head.

The Cardinals and Kingsbury feared that Murray had a serious injury after Monday’s game with Kingsbury admitting it "doesn’t look good."

Murray was replaced by backup Colt McCoy, who will likely remain the starter for the rest of the season. The Cardinals (4-9) have lost five of six, including their past three.

The Cardinals posted to social media "Minor setback for a major comeback. We know @K1 will be back and better than ever. Heal soon QB1."

Arizona’s recent hopes as a franchise have revolved around the development of Murray, who was taken with the No. 1 overall pick out of Oklahoma in 2019.

The quarterback’s fourth season has been a tough one. And that was before Monday’s injury.

The two-time Pro Bowl selection signed a $230.5 million contract during the offseason that could keep him with the franchise until 2028, but that was when a steady stream of unwanted headlines started.

Murray took a lot of ridicule after it was discovered his new contract mandated at least four hours of "independent study" during game weeks, which was unusual for an NFL quarterback. The clause was later removed, but the damage to his reputation was done.

Murray also battled a bout of COVID-19 during training camp which kept him out for about a week and he recently took criticism from former teammate Patrick Peterson, who said on his "All Things Covered" podcast that "Kyler Murray don’t care about nobody but Kyler Murray."

Now he has to deal with the most serious injury of his professional career. In 11 games this season, he finished with 2,368 yards passing, 14 touchdowns and seven interceptions.