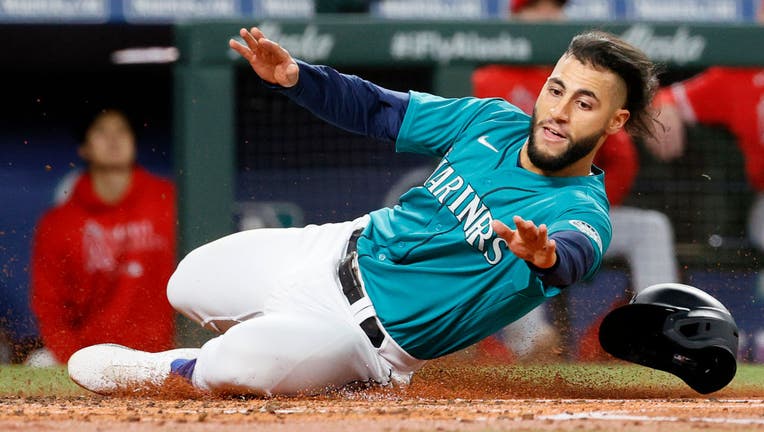 SEATTLE, WASHINGTON - OCTOBER 01: Abraham Toro #13 of the Seattle Mariners scores on a double by Jarred Kelenic #10 during the second inning against the Los Angeles Angels at T-Mobile Park on October 01, 2021 in Seattle, Washington. (Photo by Steph C

SEATTLE - After all the one-run games they’ve played this season, the Seattle Mariners were waiting for their next late-game hero to emerge.

That clutch hit was never delivered for the Mariners. And now Seattle finds itself needing help from others to see its 20-year postseason drought end.

Jose Suarez threw five strong innings, Brandon Marsh accounted for all the offense with a two-run double, and the Los Angeles Angels landed a major blow to Seattle’s postseason hopes by beating the Mariners 2-1 on Friday night.

Seattle dropped into a tie with Toronto, both of them one game behind Boston in the race for the second wild card in the American League. The Mariners had won 10 of their last 11 and started the day knowing a sweep of the Angels would at the very least force a tiebreaker game next Monday.

"We have played that game so many times this year it’s incredible," Seattle manager Scott Servais said. "And when we’re in that game, we’ve just had a knack of coming up with the big hit, creating havoc out there on the bases and getting enough action to push across a run. Just didn’t happen tonight."

Seattle failed at situational hitting in the seventh and missed its best chance to pull even. In the ninth, Kyle Seager led off with a double, but Raisel Igelsias recovered to get Luis Torrens, Abraham Toro and Jarred Kelenic for his 34th save.

"We are where we are. We’re at the moment of truth, I guess. Tomorrow’s game is a big one," Servais said.

Suarez (8-8) was terrific for five innings, the only damage coming on a single by Toro and RBI double from Kelenic. Otherwise, the Mariners were shut down by the lefty, who closed the season by winning three of his final four decisions after joining the Angels rotation in July.

The combo of Mike Mayers, Jose Quijada, Steve Cishek and Iglesias held off Seattle for the final four innings and sent Seattle’s first full-stadium sellout crowd of since 2019 — more than 44,000 — home deflated.

"Our guys got that opportunity to get to feel what it’s like to go to the playoffs," Angels manager Joe Maddon said. "It definitely had that vibe tonight."

Seattle knew shortly after first pitch that it needed a win to keep pace with Boston and stay ahead of Toronto. And for most of the night, those fans were filled with nervous energy, waiting for an offensive burst that never came.

The seventh inning is what will linger with the Mariners.

Torrens tripled to open the seventh, his second of the season and third of his career. Toro walked, but Seattle failed in three attempts to get the runner in from third base.

Quijada entered and struck out Kelenic swinging at what would’ve been ball four with the infield playing back and conceding the tying run. Tom Murphy struck out on four pitches and Dylan Moore was called out looking on a borderline 3-2 pitch.

Seattle starter Marco Gonzales struggled in only one inning but it was enough for the lefty to take the loss. Gonzales (10-6) gave up a single to Luis Rengifo and walked David Fletcher to open the third. Marsh drove a 2-2 fastball out to deep left-center and Moore was unable to run down the deep flyball, allowing both Rengifo and Fletcher to score.

Gonzales escaped the inning thanks to a key double play off the bat of Kurt Suzuki and finished six innings, allowing just three hits and struck out five.

"I wouldn’t doubt us," Gonzales said. "This is a group that has strong belief in each other, belief in themselves, belief in the work they put in and that’s not changing now."

TOP OF THE ORDER

The top four hitters in Seattle’s order — J.P. Crawford, Ty France, Mitch Haniger and Seager — had a miserable night going a combined 2 for 15 with three strikeouts and hitting into two double plays.

The Seattle chapter of the Baseball Writers Association of America handed out its yearly awards before Friday’s game. France was voted player of the year; Chris Flexen was voted pitcher of the year; and Crawford received the "Unsung Hero" award.

The Angels will have LHP Reid Detmers start Sunday’s season finale. The Angels previously announced Shohei Ohtani would not start on Sunday and skip his final turn in the rotation. It will be Detmers’ fifth start of the season but first since Aug. 21. Maddon said he would be on a limited pitch count.

"If he went five innings, 75 pitches, I think we would all enjoy that," Maddon said.

PREVIOUS COVERAGE: Seattle Mariners fans 'Believe' in clinching a spot in the playoffs since 2001 season