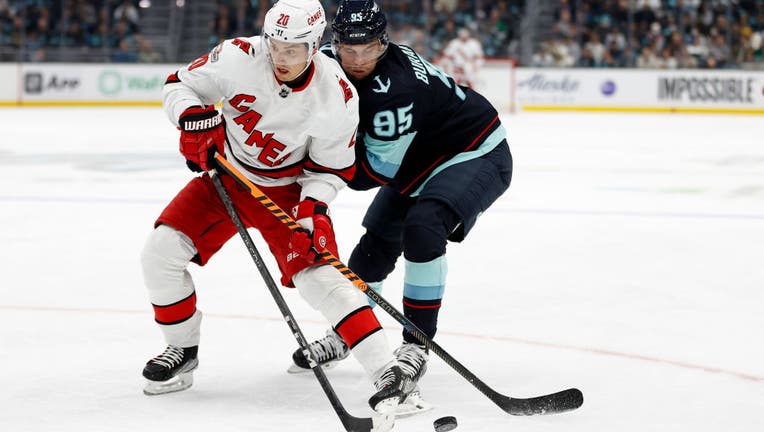 SEATTLE, WASHINGTON - OCTOBER 17: Sebastian Aho #20 of the Carolina Hurricanes and Andre Burakovsky #95 of the Seattle Kraken fight for the puck during the first period at Climate Pledge Arena on October 17, 2022 in Seattle, Washington. (Photo by Ste

SEATTLE - Andrei Svechnikov scored a pair of goals, including a power-play goal and an assist, as the Seattle Kraken fell 5-1 to the Carolina Hurricanes on Monday night.

Seth Jarvis, Sebastian Aho and Jordan Martinook each scored as well for the Hurricanes as the Kraken have been thwarted in each of their first two home games of the season.

The Kraken (1-2-1) were pressured throughout the contest as the Hurricanes out-shot Seattle by a 34-23 margin. Five Kraken penalties proved costly as well as two Carolina tallies came on the power play.

"I think we're giving away the puck a little bit too easy and we're not hard enough on the pucks and we got to be better, said André Burakovsky, who scored the only goal for Seattle on a power play effort in the second period.

Carolina controlled possession throughout the contest. Seattle struggled to possess the pick, struggled to break into the offensive zone, struggled to win puck battles against the boards and couldn't solve Hurricanes goaltender Frederik Andersen. The Hurricanes had 62 percent of the high-danger chances in the game.

The Kraken have now lost their first two home games of the season by a 10-3 margin after Saturday's 5-2 loss to the Vegas Golden Knights and the 5-1 loss to Carolina.

"Tonight is much different. Tonight is different," head coach Dave Hakstol. "Yet, the one piece that led to the three minor penalties that we ended up taking, which them and themselves we have to address, but the one piece was a turnover in a high delay that we throw a puck to the middle of the ice and it's coming back down our throats. So that's something we got to clean up and that's got to be cleaned up now."

Philipp Grubauer allowed a soft early goal as Jarvis whacked an Aho rebound up between the post and Grubauer's padding for an early 1-0 lead.

The second goal for Carolina was one that particularly irked Hakstol. Seattle had killed off a pair of penalties without damage. But Jordan Eberle picked up a high-sticking penalty less than a minute exiting the penalty box after he had a slashing call. The Hurricanes cashed in with Aho's goal to go up 2-0.

"I don't like to the second goal of the game," Hakstol said. "We had done a good job on two previous kills. Now you're playing with fire when you put these guys on the power play that often, and it came back to get us on their second goal. We missed a rotation on that. And then right after that, the high-stick penalty (from Vince Dunn) right after our first goal, you know, we actually broke the play up but they got a bounce and made a play on it and that's the fire that you're playing with when you land on that PK as often as we did at critical times tonight."

Burakovsky's goal came just over a minute after Aho extended the Carolina lead. Martinook had tripped Burakovsky to head to the box and Jared McCann and Eberle combined to give Burakovsky a feed for a wide open look that beat Anderesen to make it 2-1. Dunn took his penalty eight seconds after the goal and it took the Hurricanes just 10 seconds into the power play for Svechnikov to get his first of the night.

Just over a minute later Svechnikov found the net again by redirected a Martin Necas shot past Grubauer to make it a 4-1 game.

"You make mistakes against good teams, especially when they put you under pressure that's going to come back to haunt you and that's what happened to us tonight," Hakstol said.

Jaden Schwartz got a clear look in close on Andersen early in the third period Vince Dunn had a good redirect attempt that were both stopped as part of Andersen's 22 saves. Seattle's offense didn't generate many quality scoring chances and the ones they did were turned aside by Andersen.

"They were tight on us every time we get to puck," Burakovsky said. "Felt like there was someone on top of you right away. I think we have to recognize how we find success. … I think we have to recognize when we're doing right things and just keep doing them. Right now we're doing it sometimes and then we get away from it again. I think we need to stay on top of what makes us successful and what makes us find a ways to create offense."

The schedule doesn't get easier for Seattle this week with the St. Louis Blues coming to town on Wednesday and a trip to face the defending Stanley Cup Champion Colorado Avalanche on Friday.