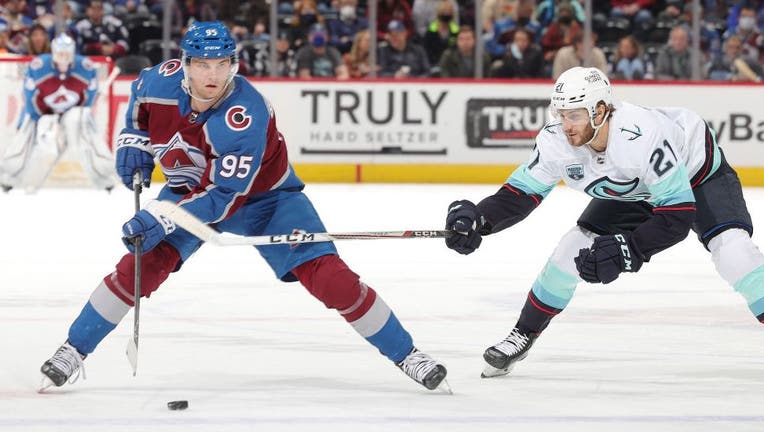 DENVER, COLORADO - JANUARY 10: Andre Burakovsky #95 of the Colorado Avalanche skates against Alex Wennberg #21 of the Seattle Kraken at Ball Arena on January 10, 2022 in Denver, Colorado. (Photo by Michael Martin/NHLI via Getty Images)

Andre Burakovsky was the big swing in free agency made by the Seattle Kraken this offseason. The two-time Stanley Cup champion winger signed a five-year, $27.5 million deal with the Kraken this summer on the heels of a cup victory with the Colorado Avalanche.

In making the move to Seattle, Burakovsky said he is excited to take on a bigger role and help build the Kraken into the type of championship contender he's played on with the Avalanche and Washington Capitals.

"I think it's a team that has the potential to become a great team and accomplish great things. So I just kind of want to be right along in that journey and be a part of this team growing for every season," Burakovsky said on Thursday.

Burakovsky said he had heard from agents throughout last season that the Kraken were interested in bringing him to Seattle should he make it to free agency. With the stacked roster in Colorado with Nathan MacKinnon, Cale Makar, Gabriel Landeskog, Nazem Kadri, Mikko Rantanan and more, there was a decent chance Burakovsky wouldn't be able to stay with the Avalanche.

That wealth of talent also meant that Burakovsky had to play a more supporting role in Colorado. It was a similar story in Washington when he was playing alongside Alexander Ovechkin, T.J. Oshie, Niklas Bäckström and Evgeny Kuznetsov. In joining the Kraken, Burakovsky said he's eager for the bigger role he'll be able to take on.

"I think that was the main thing. I think one for me too was obviously getting a bigger role, play a little bit more, take more responsibility," he said.

Burakovsky is coming off a career year with the Avalanche. He had 61 points on 22 goals and 39 assists in 80 games played in Coloardo. All numbers were career-highs. While his exact fit with the Kraken has yet to be determined, he'll easily pencil in to one of Seattle's top two lines.

The Avalanche played in Seattle twice last season. While Burakovsky didn't get the chance to explore much of the city in his brief stops in town, he did get to Pike Place Market and had dinner at the Pink Door. Not only is he excited about the move to Seattle, he said his girlfriend is quite enthusiastic as well.

"It looks beautiful with the water and the mountains in the background. So we're super excited to get there. The city looks unbelievable," he said.

On the ice, Burakovsky said he was impressed by the Kraken's tenacity last year in the games between the two teams. While the Avalanche throttled Seattle, jumping out to a 7-0 lead en route to a 7-3 victory in their first trip to Climate Pledge Arena, the Kraken earned a 3-2 victory late in the season ahead of Colorado's cup run.

"I thought Seattle last year was a really tough team to play against," he said. "I know the first game went in our favor kind of easy, but the second game I think we lost. It was always a tough to play against Seattle because they were working extremely hard, it was tough to get to the net. It was tough to win battles in the corners. They were playing with tremendous speed and that's the kind of hockey I like. I like it to go fast. Fast players and play with a lot of speed. So I think this team's going to fit me well. Yeah, like I said, it was definitely a tough team to play against."

Burakovsky knows the Kraken are still building their organization. But through former teammates Marcus Johansson, Philipp Grubauer and others, Burakovsky was impressed with what he heard about the team.

"They were all excited about the city, about the team, how professional the team and organization is so when we came down to it was kind of an easy choice to be honest," he said.

While Seattle may not be poised for a cup run just yet, Burakovsky wants to be one of the pieces that gets the team into the playoffs for the first time and eventually competing for the ultimate prize.

"I want to help the team as much I can to first of all get to the playoffs and then hopefully win another cup. That would be great in Seattle," he said.