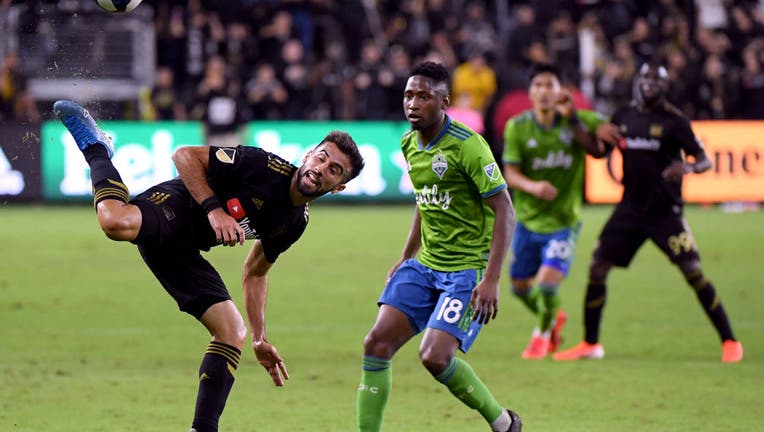 FILE - Diego Rossi #9 of Los Angeles FC plays a ball in front of Kelvin Leerdam #18 of Seattle Sounders during the second half in a 3-1 Sounders win during the Western Conference finals at Banc of California Stadium on Oct. 29, 2019 in Los Angeles, C (Photo by Harry How/Getty Images)

SEATTLE - Amazon has acquired the video streaming rights for Seattle Sounders games for its Prime Video service, marking just the second time the tech giant has partnered on a team-specific deal to broadcast games.

The agreement announced Tuesday covers three years and is for all non-nationally televised Sounders games. The streaming option will be available within Seattle’s regional broadcast footprint, which covers most of the state of Washington.

“We’ve obviously been longtime fans, have gone to a bunch of matches,” Marie Donoghue, Amazon vice president of global sports video, told The Associated Press. “But when we heard there was an opportunity we definitely jumped on it, and we were excited to have those conversations and are thrilled to get to the end.”

Amazon has several league agreements for streaming broadcasts, including a deal with the NFL to show Thursday night games on Prime Video. Amazon also has tennis and soccer streaming deals in the United Kingdom and will have Champions League streaming rights in Germany beginning in 2021.

But Amazon has been limited with team-specific deals. The company reached a deal prior to the COVID-19 pandemic with the New York Yankees to broadcast 21 Yankees games to members in New York’s market this season at no additional cost. Those games reverted back to the Yankees’ YES Network when the Major League Baseball season was shortened to 60 games, and there’s been no announcement about the 2021 season.

The deal with the Sounders is the most extensive to date for Amazon and will run through the 2022 season.

Sounders owner Adrian Hanauer said it’s been a goal to find a partnership with Amazon as the company has grown.

“It’s been a long, long process. We have had conversations off and on for years, and for sure when Marie got there continued to have conversations about where we might be able to form a partnership,” Hanauer said. “The conversations increased and then as our rights became free and clear, obviously Amazon was our No. 1 potential partner.”

It’s also the second major sports-related move by Amazon in its hometown in recent months. The company purchased the naming rights for the future home arena of the Seattle Kraken, the NHL expansion franchise that will play its first season in 2021-22. The new facility will be named Climate Pledge Arena.