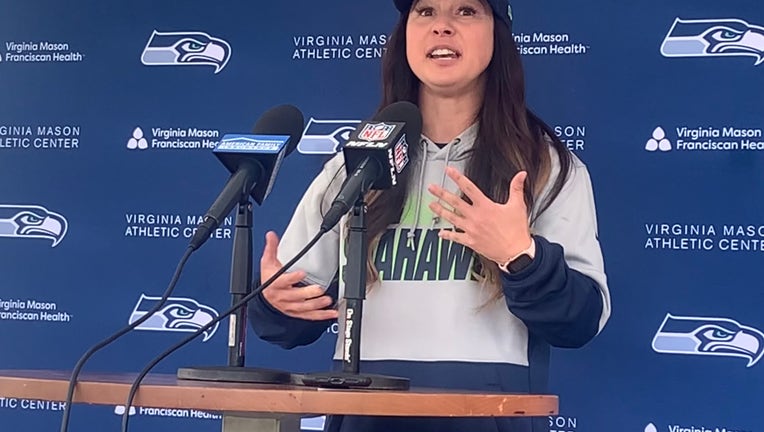 Amanda Ruller, an assistant coach for the Seattle Seahawks as part of the Bill Walsh Diversity Coaching Fellowship Program, speaks with reporters following a practice at the Virginia Mason Athletic Center in Renton, Wash. on June 14, 2022.

"I get to do that every day for practice and I just got to step back and remind myself, ‘I get to do this, I get to be here’, and I'm going to treasure that forever, no matter what happens," Ruller said after practice on Tuesday.

Ruller, former NFL linebacker Akeem Dent, and South Carolina State defensive coordinator Jonathan Saxon, are the three coaches with the Seahawks that are part of the Bill Walsh program. The objective, per the NFL, is to use training camps, offseason workout programs and mini-camps to give talented coaches opportunities to observe, participate, gain experience, and ultimately gain a full-time coaching position in the league.

Ruller has been serving as a running backs and special teams coach with McMaster University in Ontario, Canada as well as with Team Ontario of the U18 Women's tackle football team before getting the chance with the Seahawks. She also helps as the assistant strength and conditioning coach at McMaster.

Ruller is a native of Regina, Saskatchewan and took an interest in football after attending games of the Saskatchewan Roughriders of the Canadian Football League with her family.

"I asked my dad, ‘Can women play football?’ Because I never saw an opportunity in coaching for women because I never saw any women coaches," Ruller said after practice on Tuesday afternoon. "So, it was interesting. He said, ‘You can do anything the boys could do,’ From there, I went out and I said, ‘Can I play football? Can I play flag football?’ And I kept being told, ‘No, you can't do this. No, you can't do that. You can't even volunteer to coach in football.’ But I made it happen."

Ruller played soccer and ran track in college at the University of Regina – the same school as former Seahawks punter Jon Ryan. She's been a competitive weightlifter, tried out for the WWE, and been a member of the Canadian Bobsled and Skeleton teams.

Ruller holds records in the 60-meter, 200-meter and 4 x 200-meter races at the University of Regina. She also holds Canadian weightlifting records in the snatch (175 pounds), and clean and jerk (215 pounds).

Despite her other accomplishments, her interest in football persisted throughout.

She tried out for Team Canada's football team and was cut. Despite being fast, she admits that she couldn't catch.

She showed up the day after being cut, determined to show that she could stick if given the chance.

Ruller traveled to the NFL Combine in Indianapolis in February in order to get in front of NFL teams and personnel. The chance with Seattle developed from that experience.

"I think when you just submit a resume, they don't get to see the type of person you are," Ruller said. "And when you're hiring a coach, you have to trust them, and you have to gain their trust and attention. So, when I was there, I made it happen, I worked my magic. And from there, someone from the Seahawks organization gave me a call and gave me an opportunity to just interview."

Despite checking in at just 5 feet tall and being the only woman as a part of the coaching staff, Ruller said she's been accepted by players and coaches alike during her time in Seattle.

"Every single player and coach and everybody here welcomed me in," she said. "I want to put that out there because a lot of people ask me that question and I want to answer it. I felt so welcomed and so put into this organization for a reason, to help these guys.

"I'm a loud person, I'm always running around out there, I'm a strong athlete, I compete in Olympic lifting, and I've competed within football, so I know how to play football and I know how to lift some weights. So, I come with a lot of expertise and they're not afraid for me to put it out there and actually showcase that, which is huge.

Ruller said head coach Pete Carroll has been great to work with as well.

"Learning from Pete Carroll has been amazing," she said. "He's a great mentor for me and that's exactly what I need to go forward to be the best coach I can be. He made me feel welcome. As soon as I walked in the building, he said, ‘How can I make you great going forward?’ I've never been asked that before, so I think that attention to detail and trust to help me to help him be a better coach is something I've never come across. I thank him so much for doing that."

Ruller will be back with the team for training camp this summer and work through preseason games in August. Whether it's with the Seahawks or elsewhere, Ruller said working in the NFL is where she wants to be.

"I want to develop my skills as a football coach," Ruller said. "I'm going to be honest, I need more experience, and I want you to judge me based on my ability, not who I am or my gender. So, I want to go forward building those skills and hopefully get an opportunity to coach within an NFL organization."